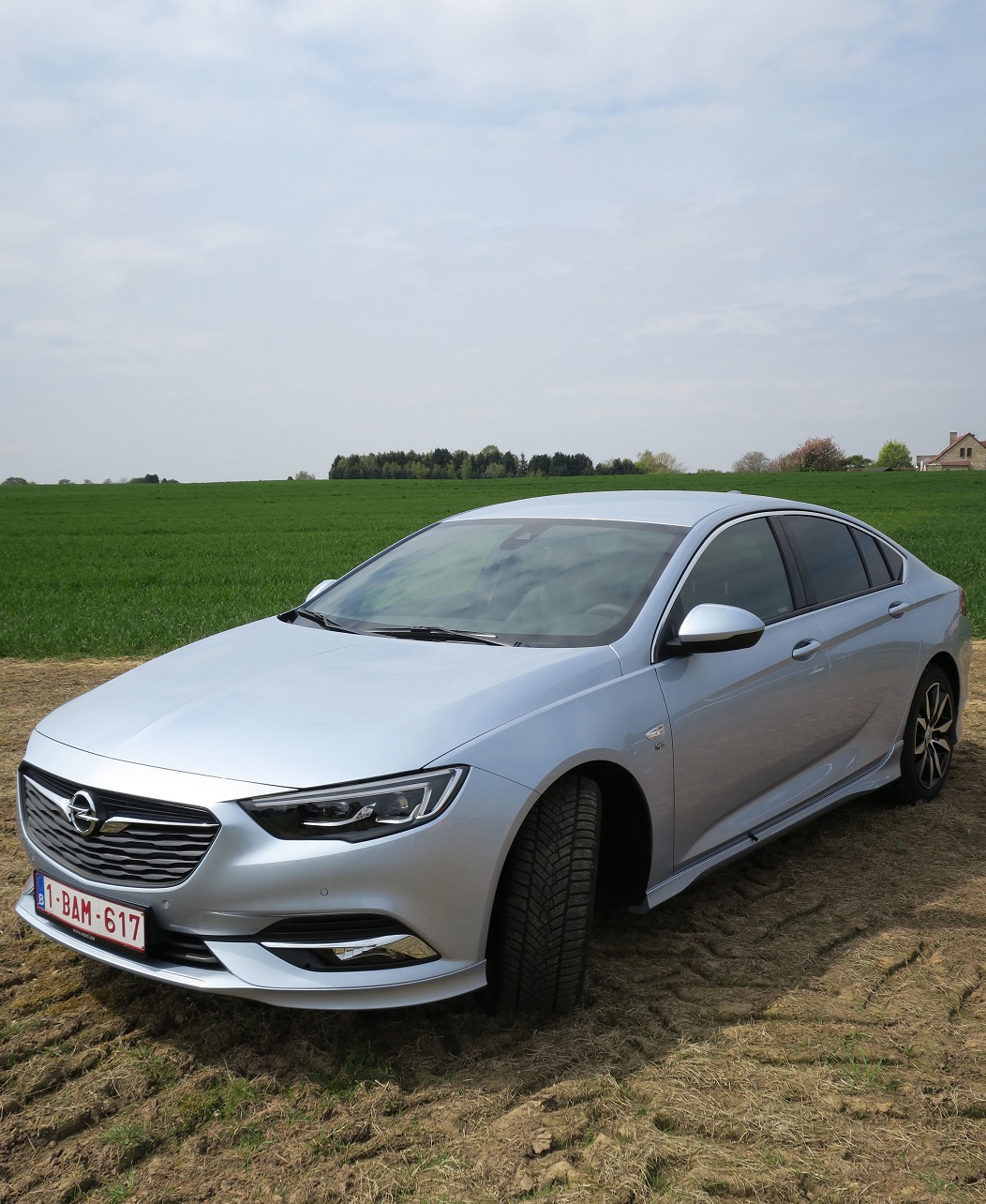 The new Insignia has stylish looks, here in Magnetic Silver with OPC pack for  the exterior…

When Opel launches a successor to its stylish flagship which was “car of the year” in 2009 and found 900.000 buyers, you can reckon it is something special. The new Opel Insignia Grand Sport and Sports Tourer recently displayed their qualities publicly for the first time when they made their premiere at the recent Geneva Motor Show, and the dynamic Opel PR team in Belgium invited us for a first drive at their magnificent Insignia Center in Zaventem. We drove for you two Grand Sport versions, one with the 136 HP 1,6 l CDTI diesel with the 6 speed auto box, and then the 6 speed manual 1,5 liter petrol engined 165 HP Turbo. We were very impressed by its mechanical refinement, its comfort, looks, ergonomics, and last but not least very entertaining handling. 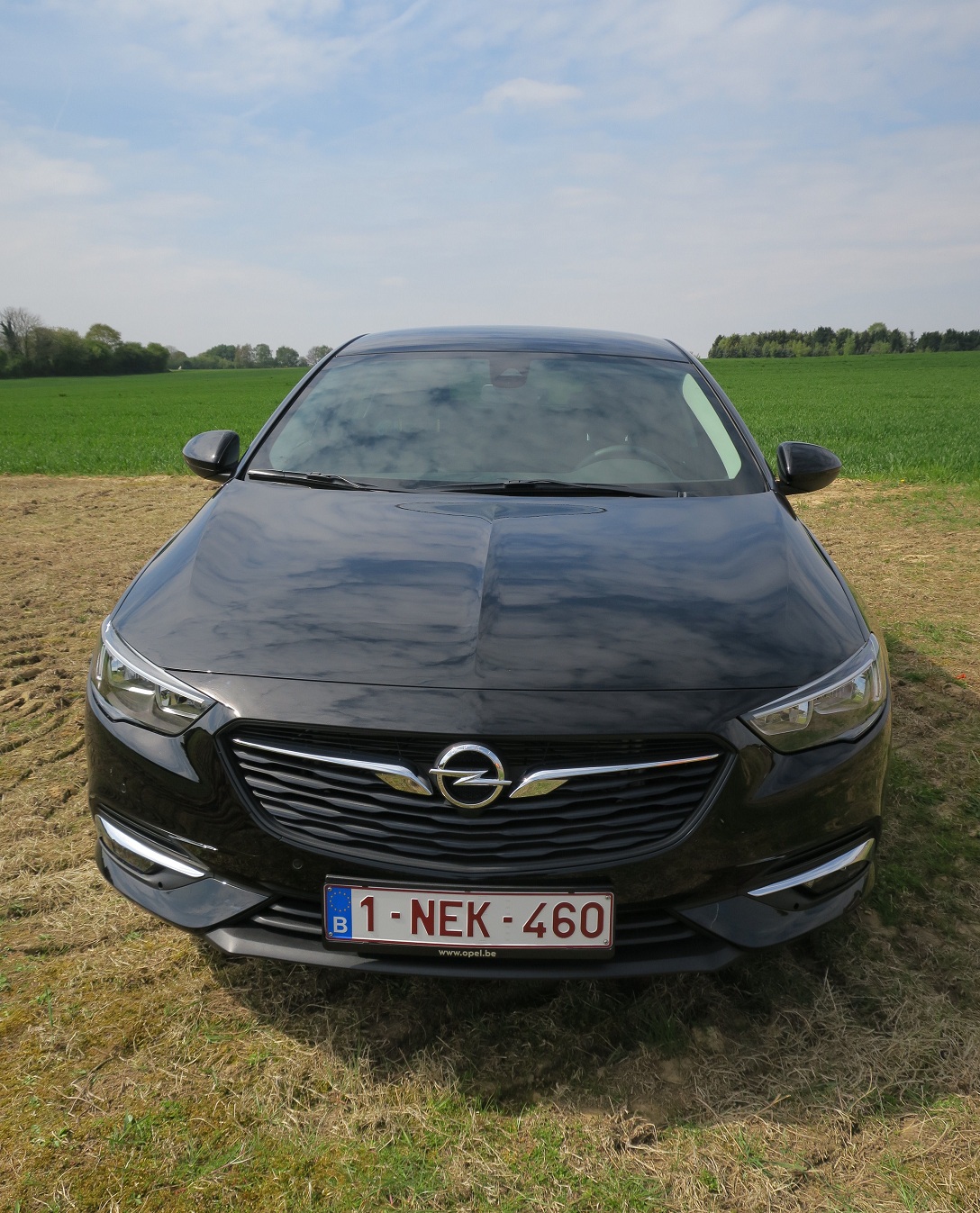 Here you see the 1,6 liter diesel version in black…

The stunning looking Monza Concept was the inspiration behind the interior and exterior design of the Insignia Grand Sport and Sports Tourer, and the result is admirable. We were able to see the Monza Concept (see photo below) at the Insignia Center, as the PR people had asked the prototype over for the occasion from Rüsselsheim. It’s a beauty, so much is sure. 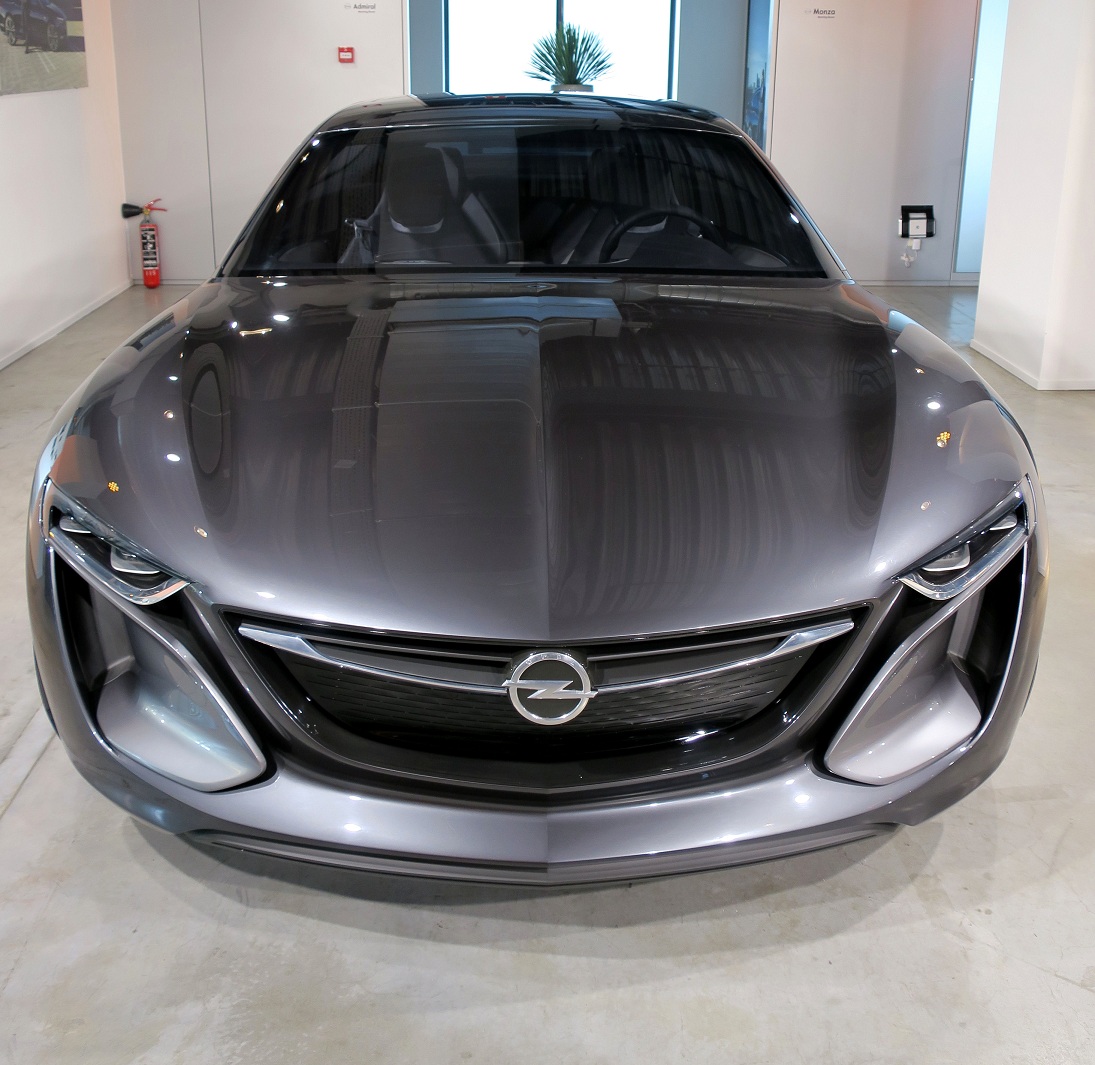 The stylish front end of the concept car…

We were also treated to some historic accents by the display of a 1937 Opel Admiral, and even an Opel bicycle and a sewing machine! We will show you some more about this in a special report, together with a focus on the well styled interior and bar of the Insignia Centre in Zaventem, created thanks to the remarkable talent and drive of Opel Belgium Manager Sales Promotion and Events Inge Van Robbroek.

Let’s turn now to the cars, which were lined up in front of the centre, awaiting a test drive. 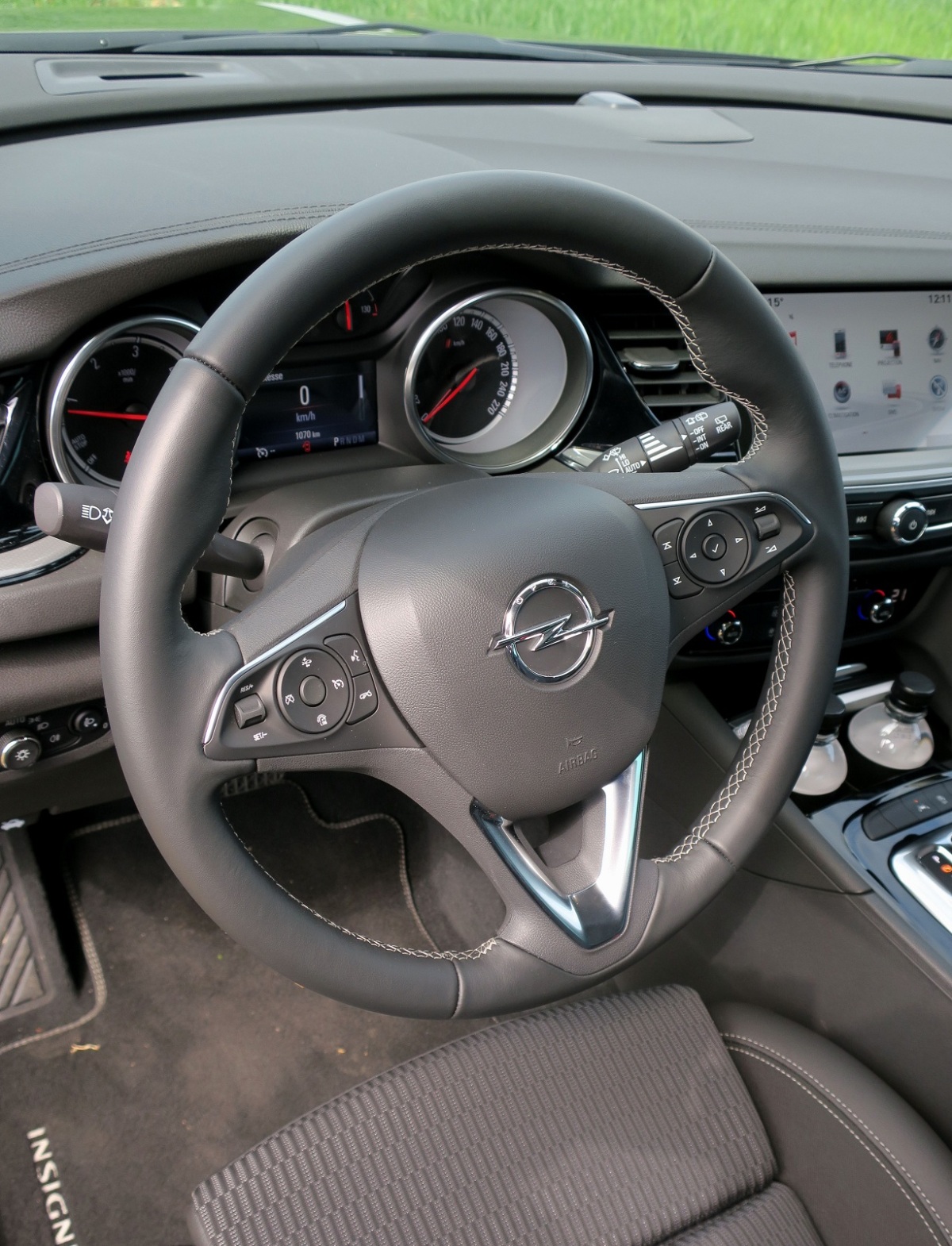 We first sled behind the wheel of a mineral black 1,6 CDTI diesel, good for 136 hp. The cunning Insignia design is also found in the interior, where we were impressed by the excellent seats, the near ideal seating position. Indeed, the designers have lowered the seat height , and with this lower position one has a better “feel” of the car. Ergonomics are also state of the art, so we found ourselves at home in the proverbial minute or so. 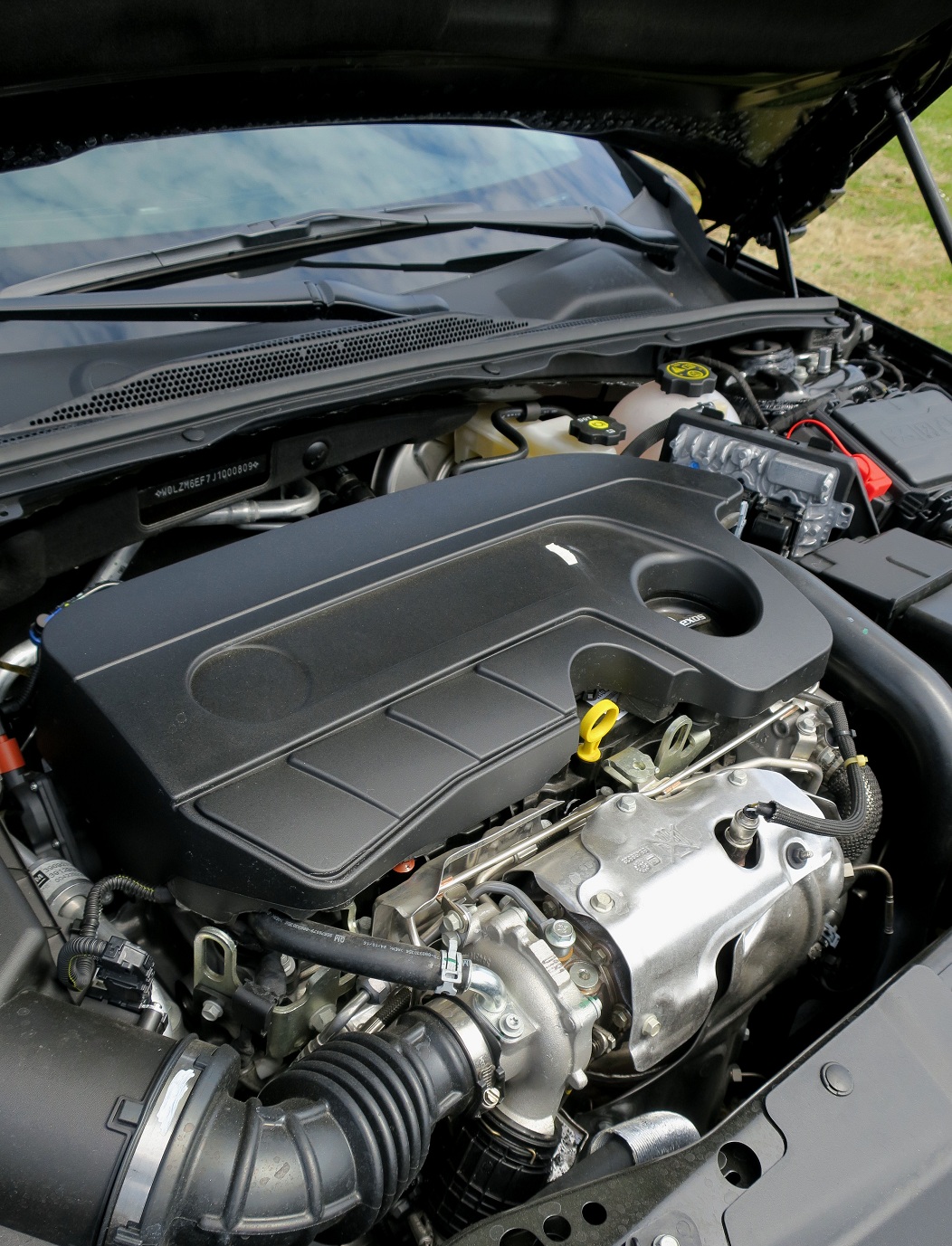 The refinement of this 1,6 liter diesel unit is beyond reproach, and it mated very well with the six speed auto gearbox. Slow speed urban driving, or rather crawling, is something which this diesel version takes eminently in its stride. In this respect, it is a true Opel. Because Opels have not only been known for their positive and rather sporting handling over the last four decades, prior to that they offered first and foremost masterful comfort and mechanical refinement. 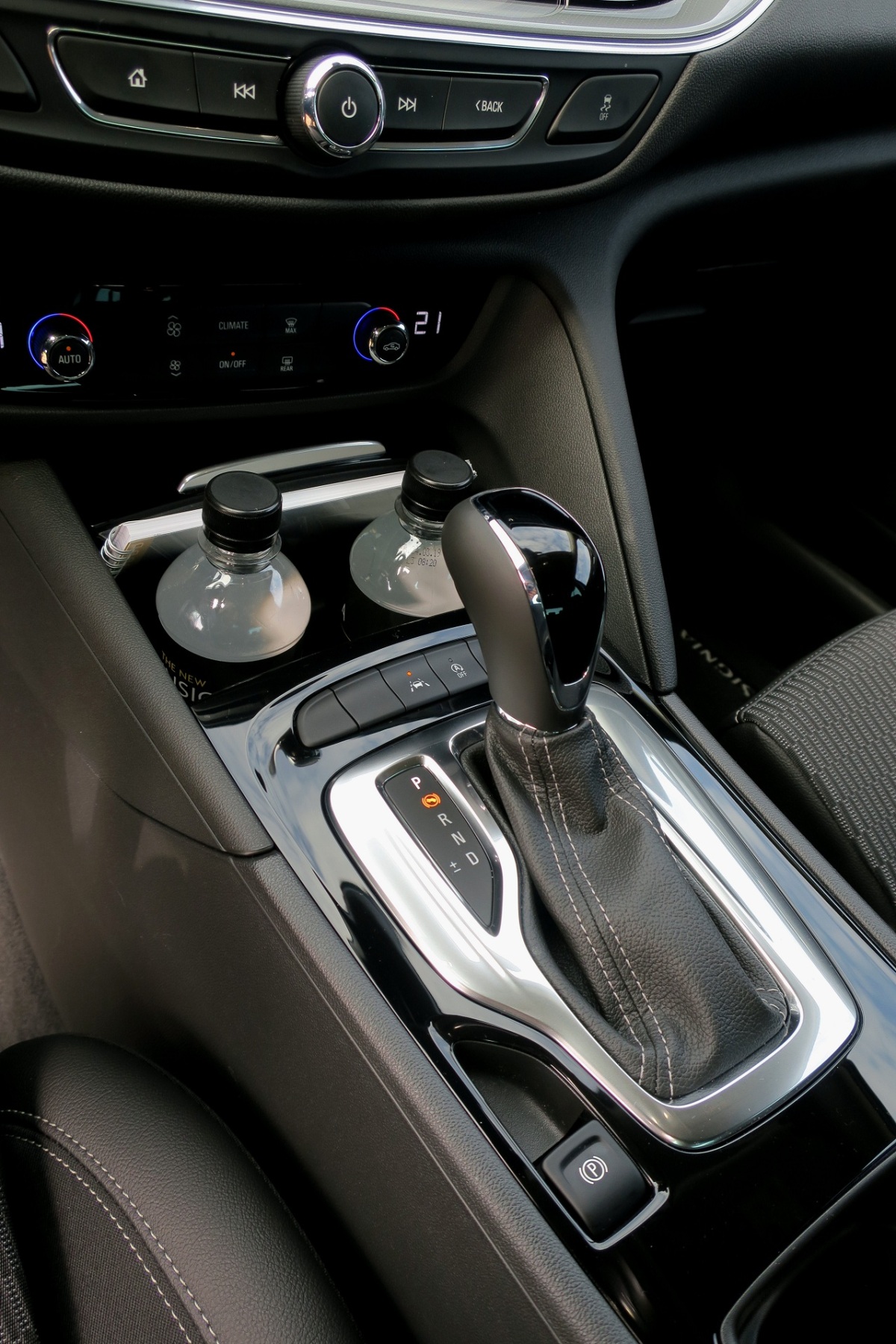 Just look at the pre-war Admiral, with its supersmooth 3,6 liter six cylinder, a tradition continued in the fifties and early sixties with the Kapitän, which also had velvety six cylinder engines 2,6 liter engine with a three speed column gearshift, and could driven in second gear down to walking speed, and then accelerate smoothly away. For the lesser mortals, and the vast majority of the Opel drivers, the same docility and smoothness was found in the Rekord, from early post war down to the late fifties with the panorama windowed Rekords, which had also white colored steering wheels and three speed column shifts. 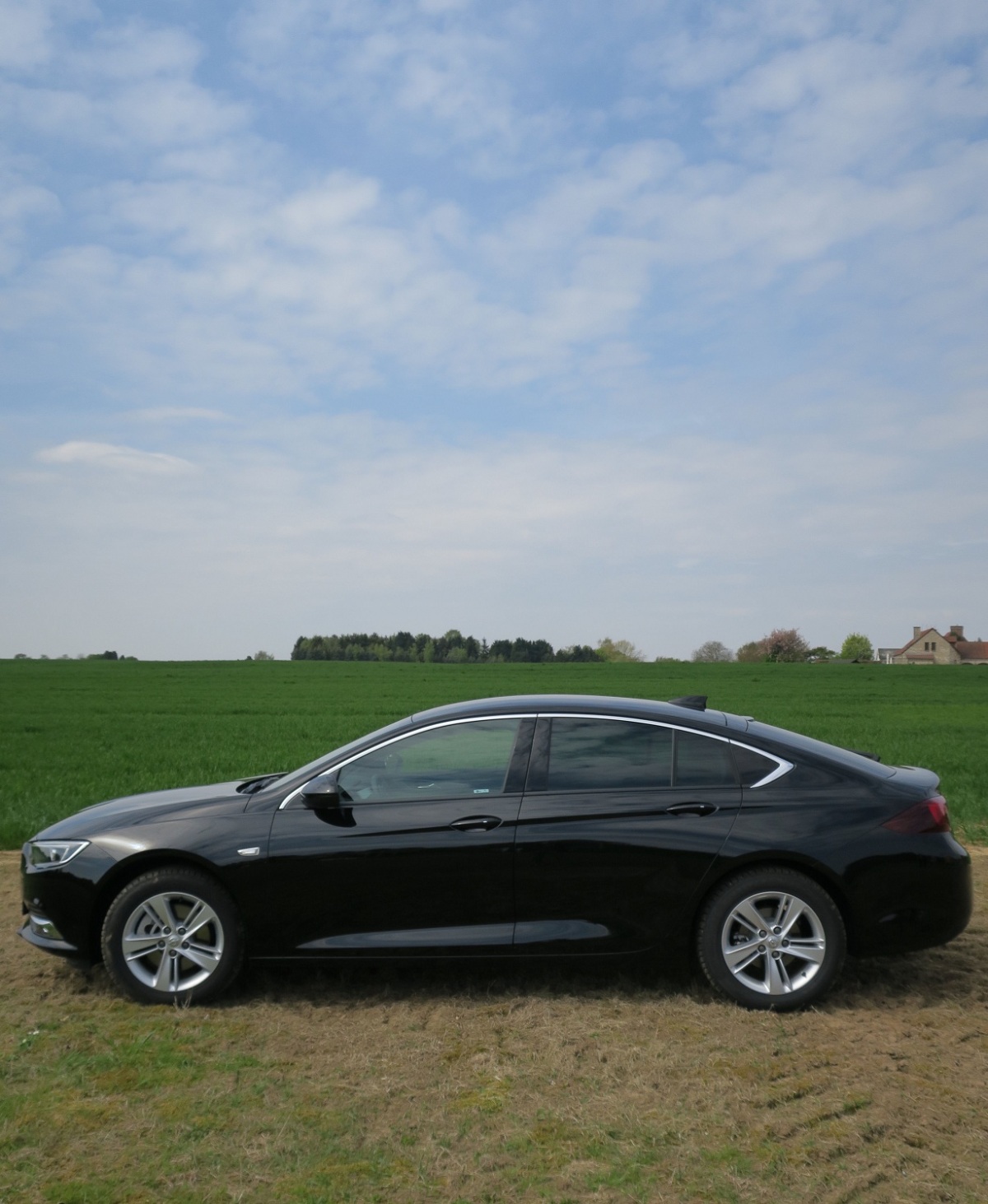 A trusty four cylinder was doing the job, with a very sedate 30 hp per liter power output or thereabouts, which were above all utterly docile. So was the very comfortable suspension, which made the car lean heavily in corners. In the sixties, a more sporting stance was chosen for chassis and suspension, last but not least for image reasons. One wanted to get rid of the “Otto Hosenträger” image, or the fat man with trouser belts, which was haunting Opel drivers and which was totally undeserved anyway. So Opels became drivers’ cars with very predictable and precise handling, and they are so until right upon this day.

But combined with this throughout the years, they have kept also this mechanical refinement, this docility, and yes, in the good tradition of the brand, this Opel remains and behaves velvety smooth when driven leisurely with restraint. As the flagship of the Opel range, the Insignia excels here in this respect.

The suspension is also very comfortable at these slower speeds, as is overall mechanical silence. 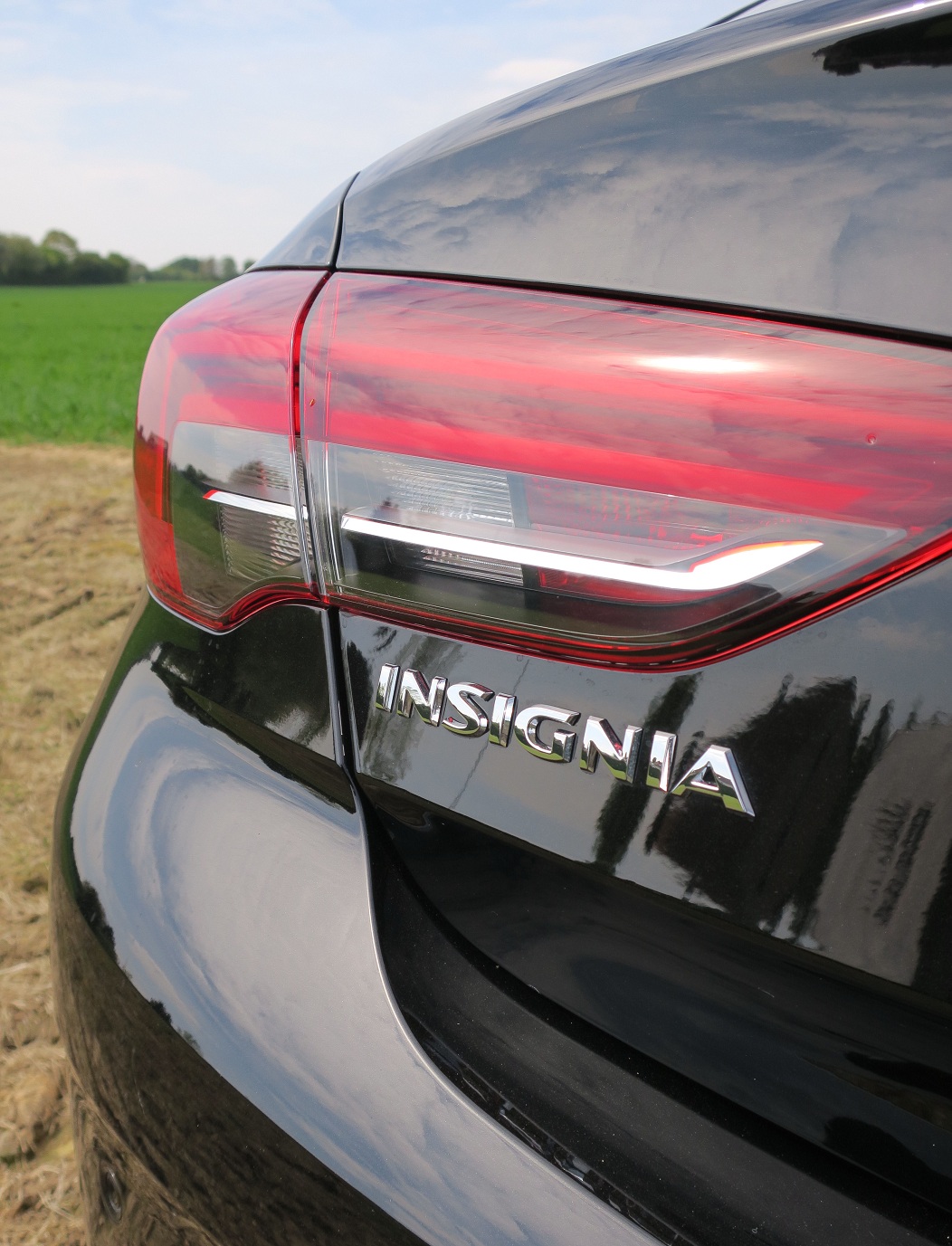 Opel is also in this Insignia taking seating comfort a bit further. One can opt for premium ergonomic seats of the new generation certified by “Aktion Gesunder Rücken” (Campaign for Healthier Backs). They offer a unique combination of electric side bolster settings, massage, memory and ventilation functions in addition to the multiple standard adjustment possibilities. Passengers in the second row can also look forward to more comfort, because like the driver and front passenger seats, the two outer rear seats are also available with seat heating. Need we say more?

What is most prominent when driving the new Insignia is the near perfect balance of this car. At speed, it just settles ideally on any road surface, displaying a totally effortless surefootedness which inspires utter confidence to the man or woman behind the wheel. 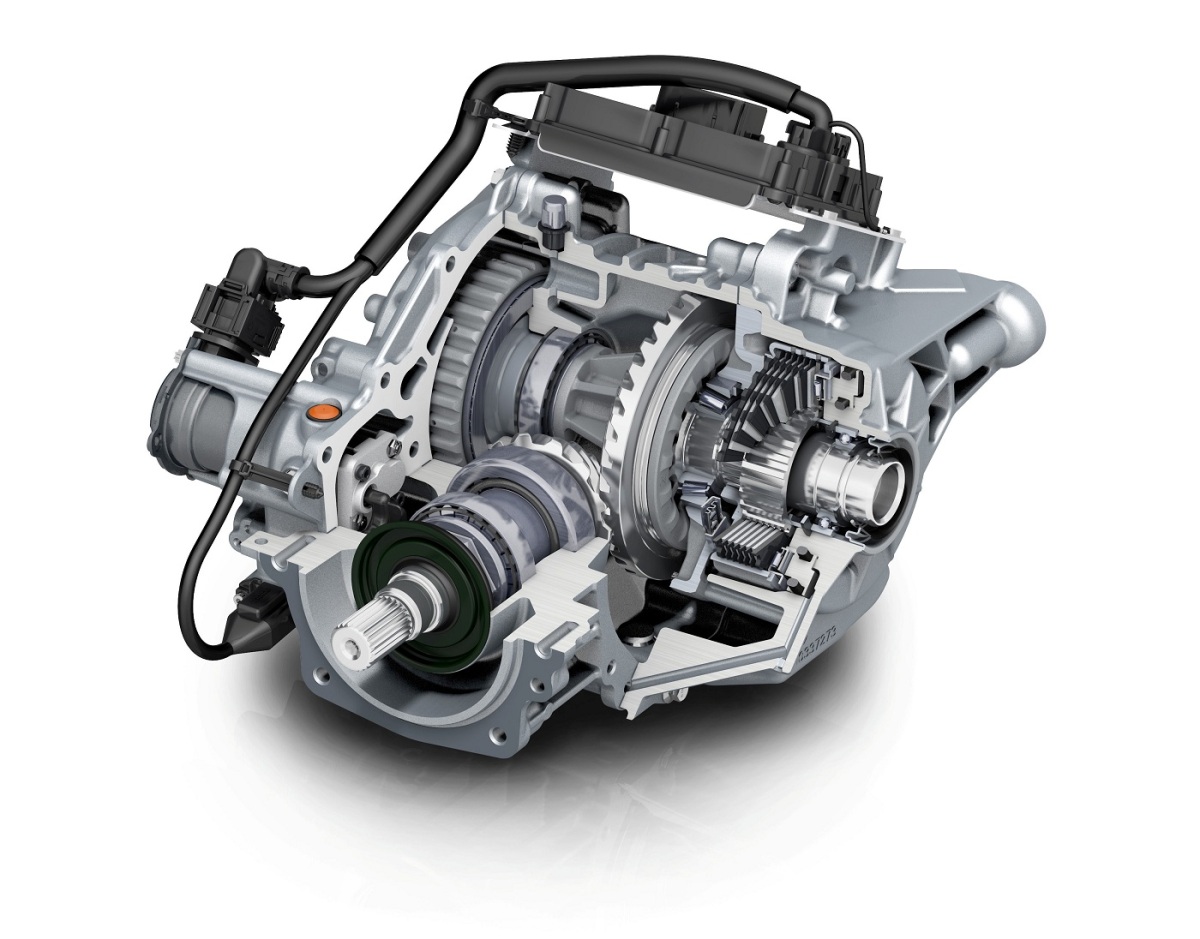 In AWD version, the differential is equipped with two multiple clutches, which distribute power in continuously variable fashion to the rear wheels…reducing jaw and thus adding cornering stability…

Of course, the Insignia sits on a new platform, and features for example optional all wheel drive with torque vectoring – or power transmission to individual wheels. On this high-tech all-wheel drive system, two multi-plate clutches replace a conventional rear axle differential and can accelerate the wheels individually in a split-second depending on the driving situation. Yes, this Insignia is indeed Grand Sport. Optionally, the chassis and suspension also allows the choice between different driving modes, from comfort to sporting, and besides engine responsiveness and auto gearbox behavior it also influences steering and suspension. The modes have now also more distinct characteristics, i.e. one “feels” better the choice one has made. 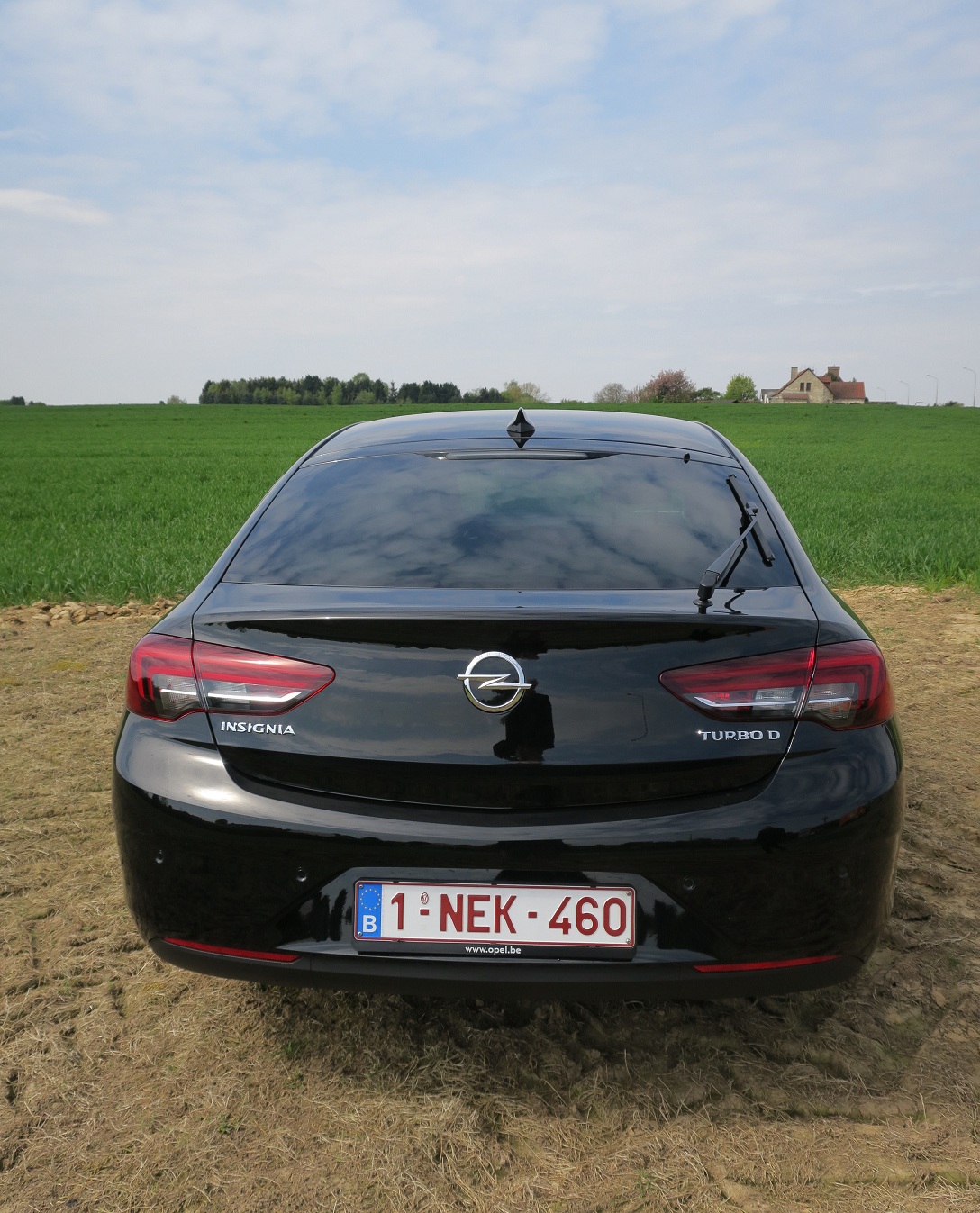 The 136 HP diesel unit copes well when extra power is asked for, and performance leaves nothing to be desired in this “base” version, which we expect to be the choice for many fleet owners. The sprint from 0 to 100 km/h is absolved effortlessly in 10,90 seconds, top speed being 203 km/h. We took our test car briefly on the motorway, and there it displays also its superb “flagship” qualities in terms of high speed comfort and stability.

Even more refinement and silence in the 1,5 liter petrol engine version… 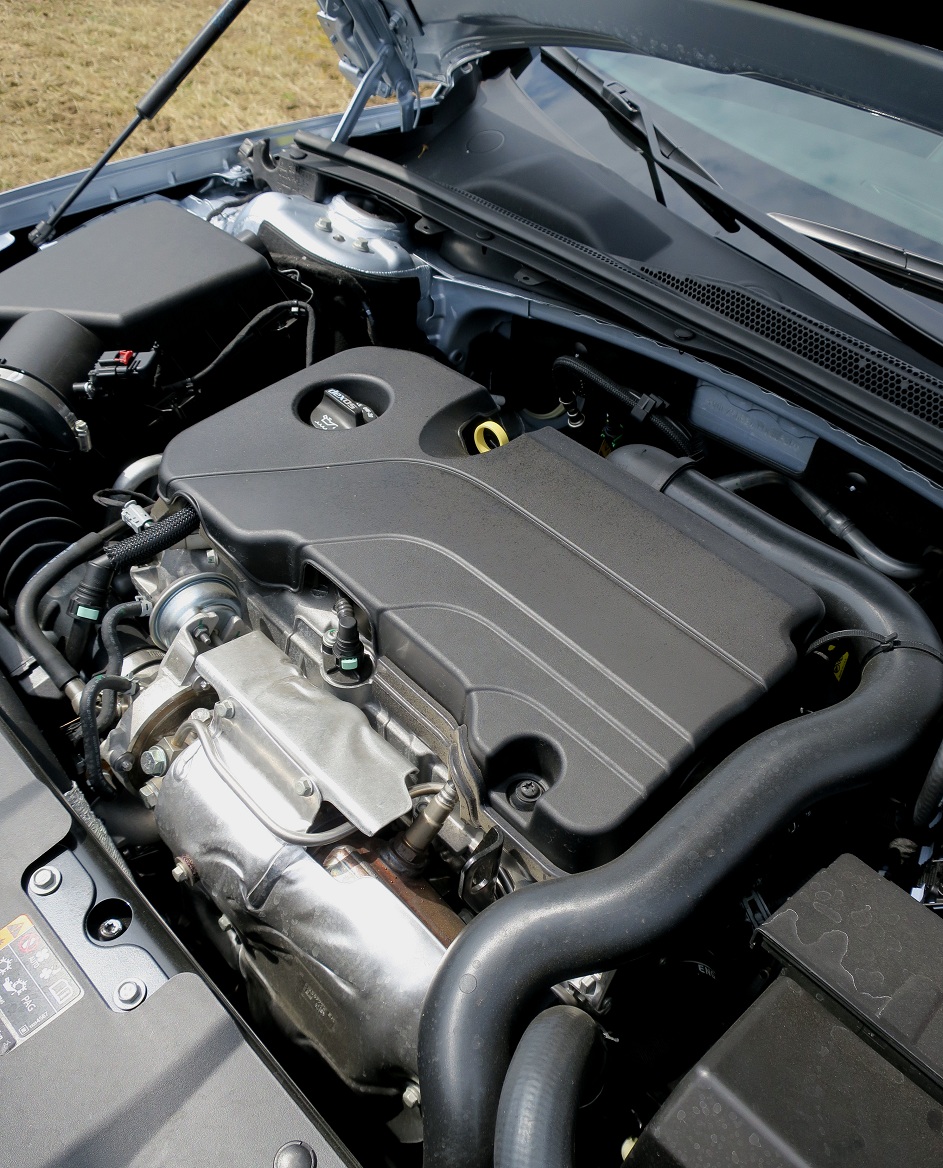 This test car came in a very aesthetic Magnetic Silver, and as you can judge from our title photo, it suits the Insignia body shape quite well. This car also had the OPC Line Exterior and Interior Sport Pack, and it is worth every penny. We liked especially the new instrument cluster, with a virtual/digital speedometer, with navigation indication at its centre, flanked to the left and right by nice analog instruments for revs, oil, water temperature and fuel. Instrument buffs as we are, we find it a very nice combination indeed! 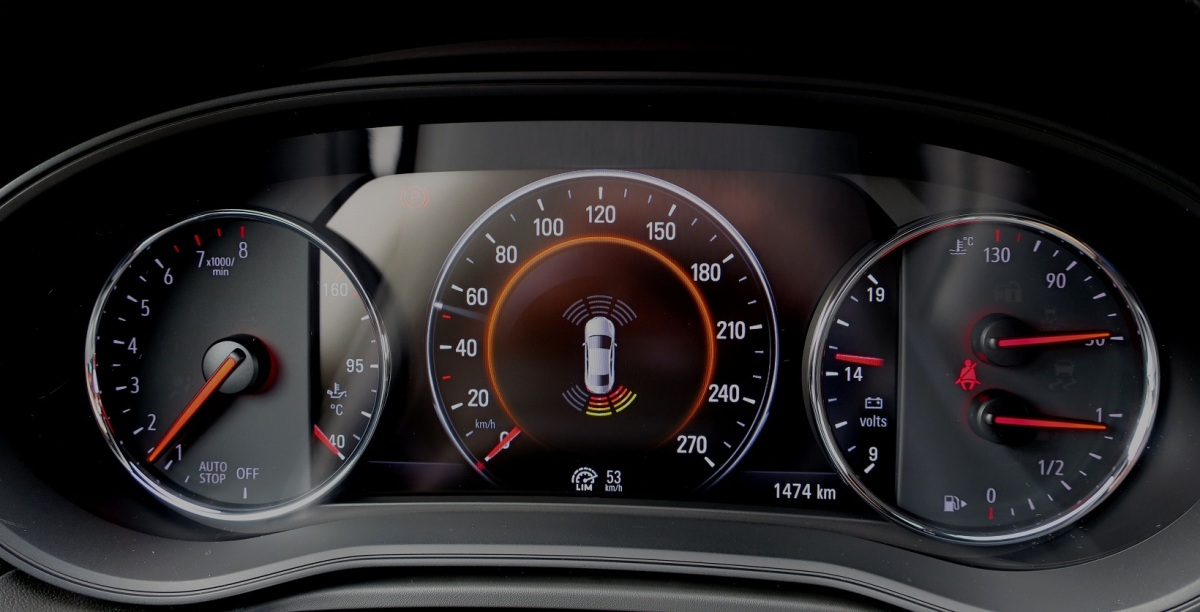 When it comes to driving, we found mechanical refinement even taken a step further. The engine is utterly smooth, docile and silent at low revs, but has very charming thoroughbred character and sound, and invites spirited driving.

Just rev it up, and a beautiful four cylinder staccato seduces your ears, whilst the engine is remaining totally vibrationless. Turbo response is immediate, no lag whatsoever can be felt. It is a joy to take the Insignia through its gears, as the manual gearbox changes slick, effortless and precise. A delightful drivetrain, with of course quite adequate performance. 0 to 100 goes in 8,90 seconds, top speed is 225 kmh. Torque is very good with 250 Nm being available between 2000 and 4500 rpm. 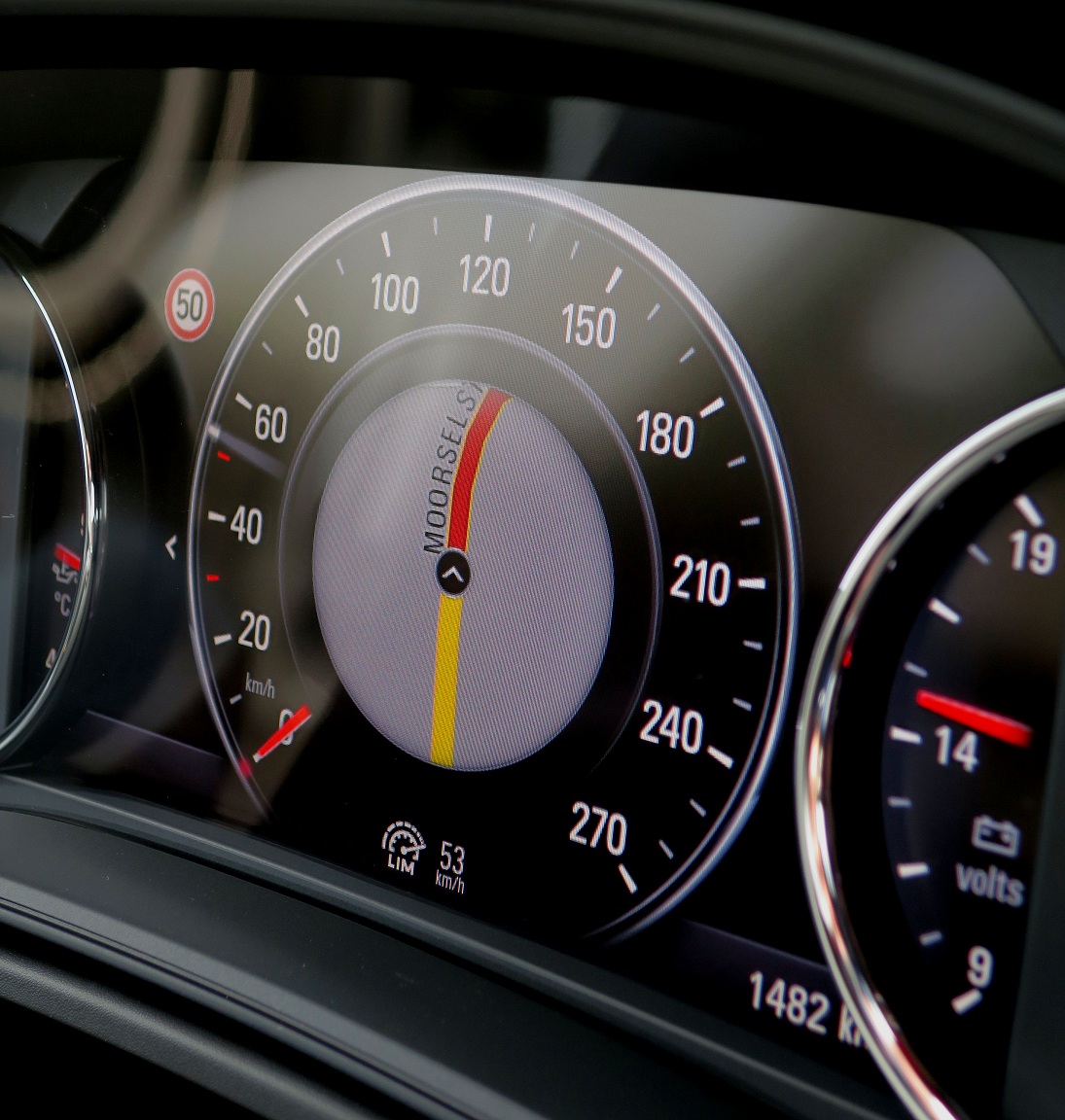 Navigation info can be displayed inside the virtual speedometer dial…

Again, this drivetrain is truly Opel too, and you can potter along at 30 km/h in third gear, with engine inaudible and unfelt, and can accelerate smoothly from this speed without the need to change down…

State of the art driver assistance and infotainment 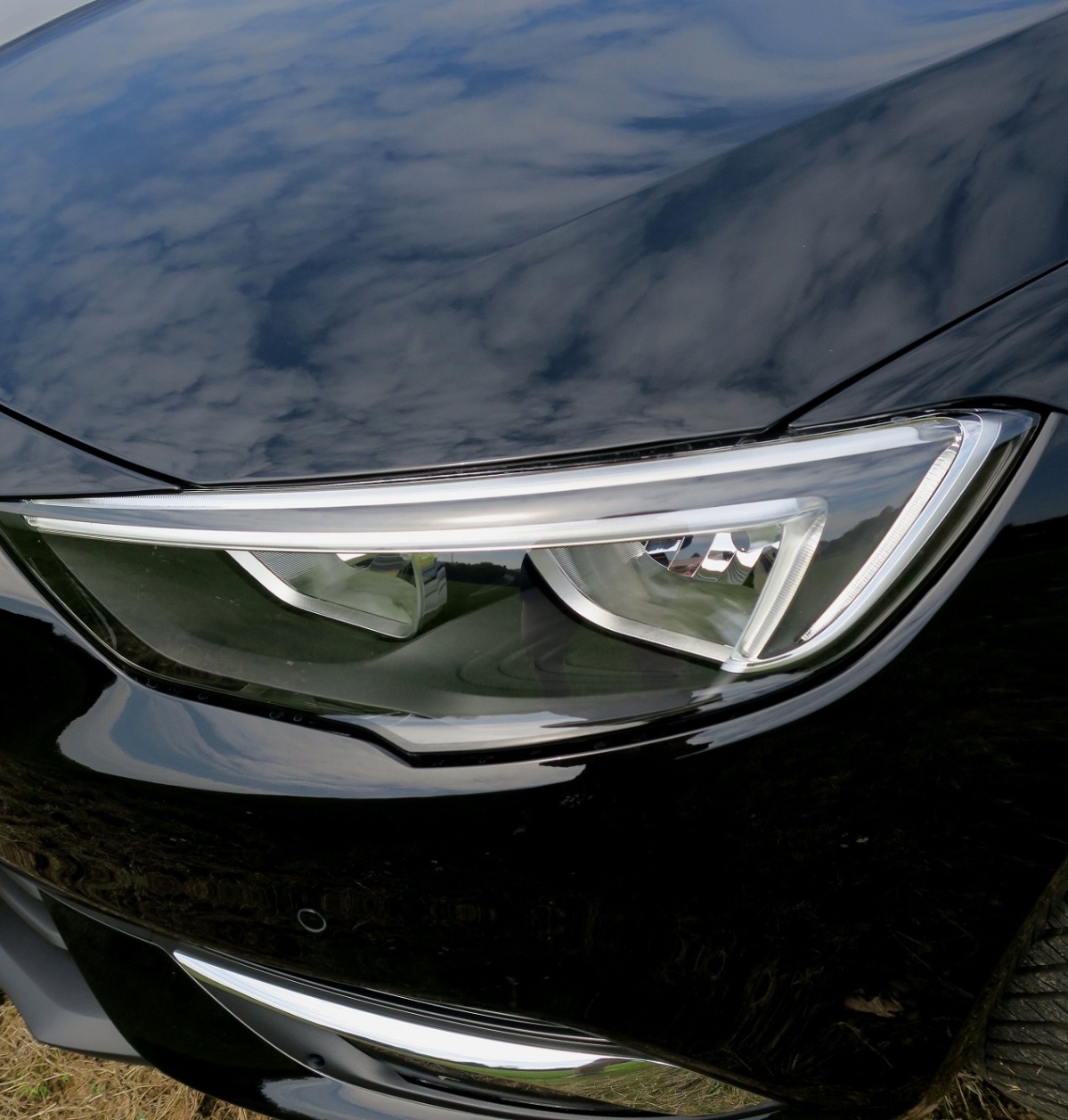 Before we go on, we must mention here the adaptive IntelliLux LED® matrix light, with 32 LED segments – twice as many as in the Astra – taking over the high beam function. The increased number of LED segments enables the various light patterns to adapt to the prevailing traffic situation even more precisely and the transitions are faster and more seamless. To improve visibility even further while driving through curves on full high beam, Opel added an innovative active curve lighting function to the new Insignia’s IntelliLux LED® matrix headlights. Last but not least, a further, dedicated LED spotlight located within the low beam module provides additional illumination at full high-beam for up to 400 meters. 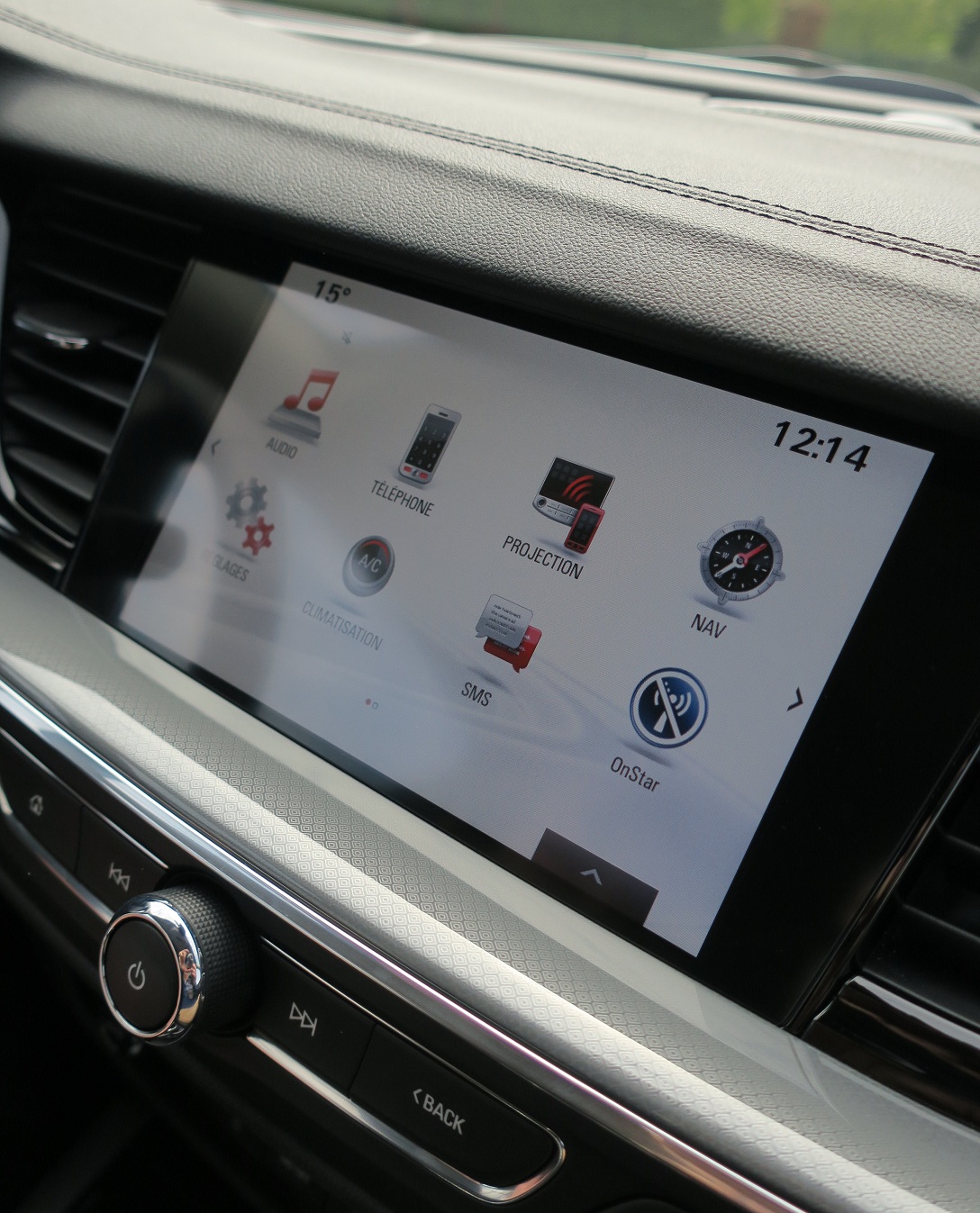 Great entertainment and outstanding connectivity – both typical for Opel – are ensured by the latest Apple CarPlay and Android Auto compatible IntelliLink systems. And while the smartphone is seamlessly integrated into the vehicle’s infotainment it now can also be charged wirelessly. Naturally, the 24/7 connectivity and service assistant Opel OnStar is also on board, offering services ranging from Automatic Crash Response to Stolen Vehicle Assistance. A new Personal Assistant service will be launched together with the Insignia, enabling its occupants to ask Opel OnStar advisors, for example, to book a hotel room or find a parking space. Furthermore, the 4G LTE Wi-Fi Hotspot featured in the OnStar system allows all Insignia occupants to connect their devices to the net.

Last but not least, there is the price. In Germany, The new Opel flagship is available to order as a Grand Sport limousine from €26.500 and as a Sports Tourer station wagon from €28.000 (RRP incl. VAT in Belgium).

Indeed, there is also a very charming looking Insignia Sports Tourer station wagon. Unfortunately, we had no chance to drive this version, but once we had the chance to do so, we will report you about it soon!