At the presentation of the new Insignia, we could admire the stylish Insignia Center in Zaventem, which for the occasion was also adorned with a magnificent Opel Admiral, dating back from 1937, and the Opel Monza Concept car from 2013.

The further exhibits also included an Opel sewing machine, and even a bicycle…

Opel built sewing machines until the outbreak of WWI. This one dates from 1909.

Just look at the photos and read the further comments…

The building is situated at the Fabriekstraat 55 in Zaventem, and is used as a showcase for the new Insignia. The building was some years ago the head office of a Belgian television production company. Customers can now register, visit the center and take an Insignia for a test drive, have a drink at the very stylish lounge.

We spoke with Opel Belgium Manager Sales Promotion and Events Inge Van Robbroek, who made a substantial contribution to the stylish ambiente of the lounge.

On show was a stunning Admiral, in a beautiful sky blue. An imposing body, mounted on a separate chassis. It could also receive therefore very good looking cabriolets and limousine bodies, and the Admiral chassis was even used for ambulances. 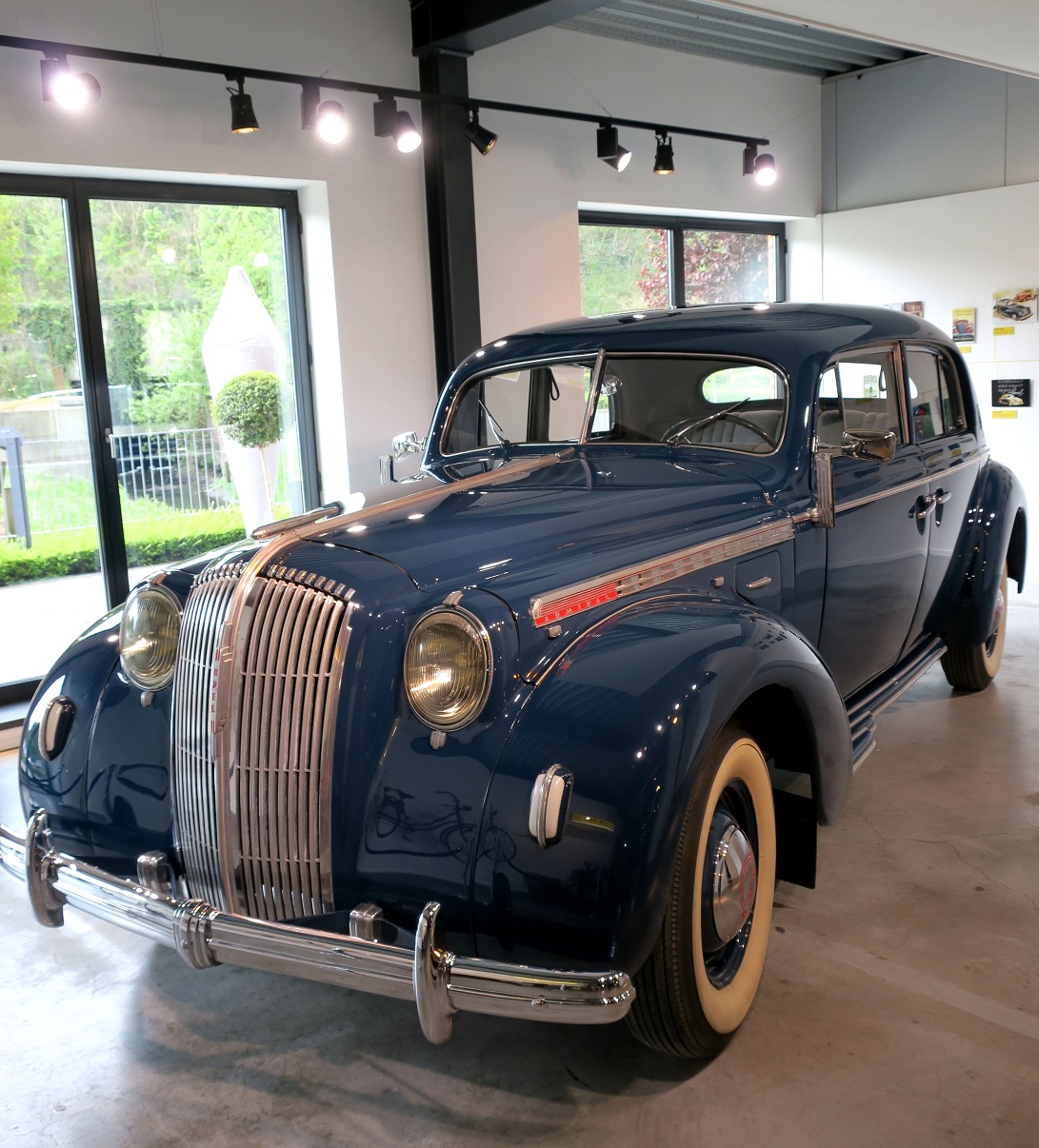 The Admiral was presented on the 1937 Berlin Motor Show, with production starting in 1938. The car was powered by a newly developed 3,626  cc straight-six engine, good for 75 PS (55 kW; 74 hp) , which made the standard bodied car 132 km/h fast. This was considered quite a high speed in those days, and the Admiral felt quite at home on the brand new Autobahnen.

The basic Admiral was offered as a four-door “Limousine” with a manufacturer’s listed price of 6,500 Reichmarks,  which was considered very competitive. There was also a four-door cabriolet listed at 7,000 Reichsmarks.

The gleaming paint of the Admiral, and the reflection of the Opel bicycle in it…

The 6 cylinder engine was also used in the 3.5 ton Opel Blitz truck  being produced at the manufacturer’s commercial vehicle plant at Brandenburg an der Havel southwest of Berlin.

Look at the “art deco” dashboard styling of the Admiral: the three white buttons on top of the dashboard surface allow you to open the lids on the dashboard for convenient storage. So the clock and water temperature instrument falls away too, as it is incorporated in the lid… allowing you to store things behind it!

The fact that the engine found also a home in the light truck meant that Admiral production was totally stopped in October 1939 with the outbreak of the war, as the truck was now built for military use.

It was a very comfortable, and mechanically very refined sedan, setting very high standards of comfort and mechanical perfection and reliability in its class. 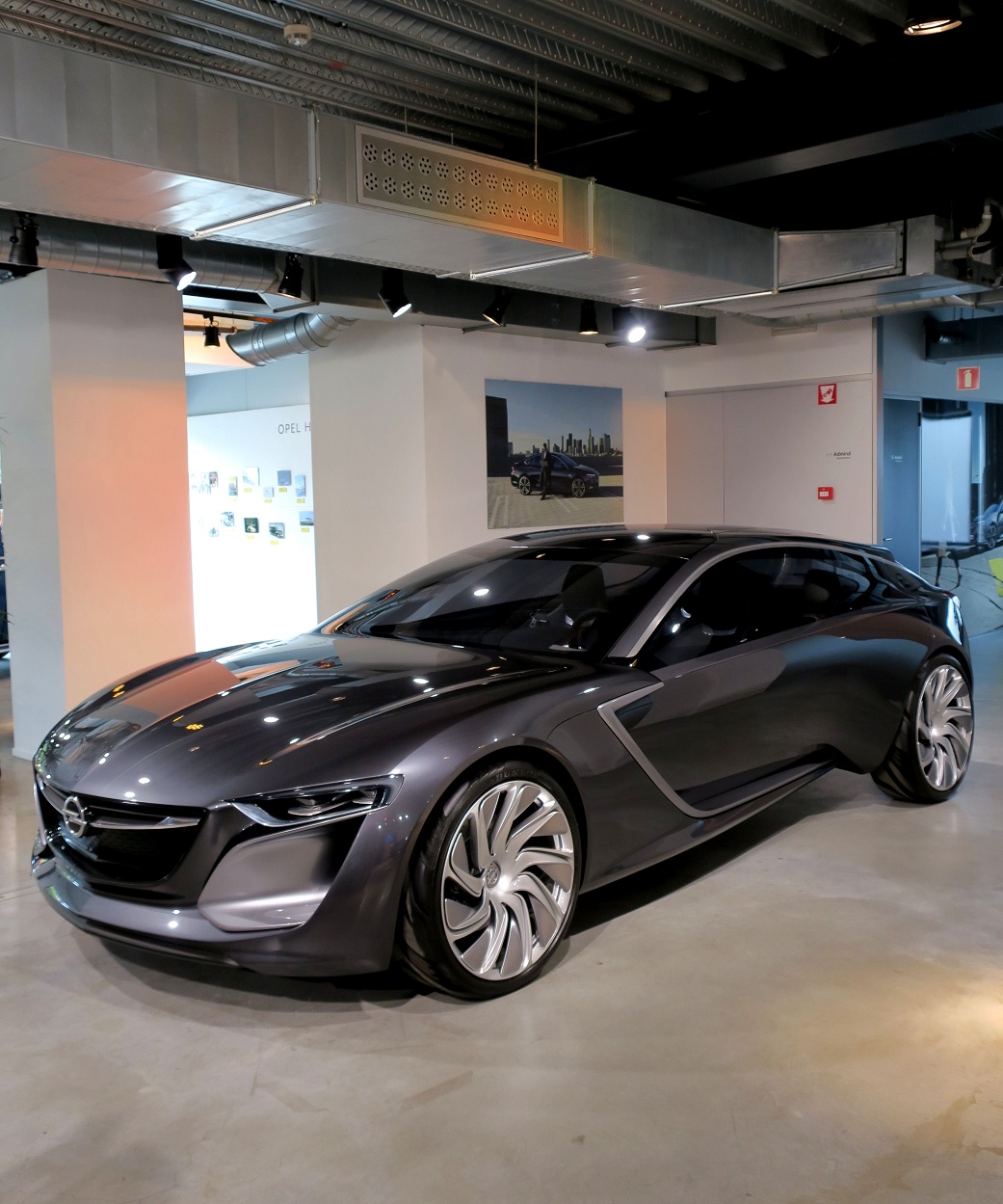 The new Monza coupe concept saw life at the Frankfurt motor show in September 2013, exactly 36 years after the original Monza was revealed at the very same event.

The Monza is 4.69m long , but merely 1.31m high. But the car still offers space for four occupants and a 500-litre cargo bay, thanks to the slightly flattened roof panel. This is accentuated by the slim, polished strip which runs from the A- to C-pillar, across the full-length gullwing doors.

Driving to the future: the dashboard of the Monza. Look at the sewing machine and bicycle in the background, and the beautiful wood panelling on the upper surface of the dashboard…

The car is a strict beauty, also on the inside. Eight miniature LED projectors turn the dashboard into an interactive display surface, creating 3D graphics for infotainment and web-browsing. All the Monza’s functions are activated by voice commands.

Efficiency under the hood…

The Monza’s new range-extender powertrain is developed from the drivetrain of the Ampera, but the 1.4-litre petrol engine is replaced by the Adam city car’s new 1.0-litre three-cylinder engine. 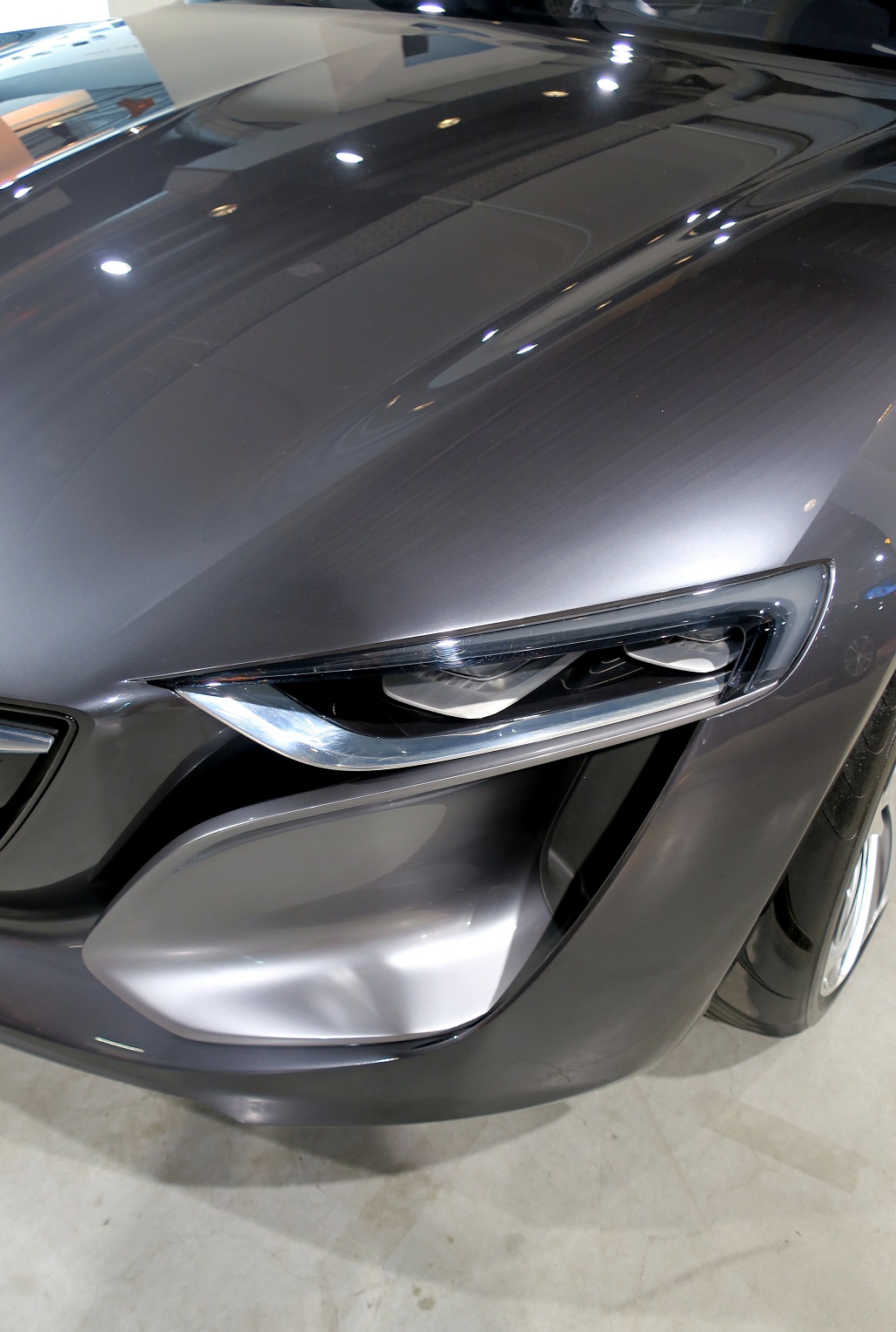 This engine runs on CNG, or compressed natural gas, and charges the lithium-ion batteries rather than power the wheels:  that is done by two electric motors developing a combined 148bhp.

We just let you admire further the photos here…