Audi presents the new Audi SQ5 at the North American International Auto Show (NAIAS) in Detroit. The sportiest member of the Q5 model series embodies more than ever the emotional concept of the practical SUV with the latest technology. It’s turbocharged, 3.0 TFSI offers delightful performance… Just read more below

… with a revolutionary combustion process

A new combustion process developed by Audi makes the 3.0 TFSI particularly efficient. It is based on the so-called “B cycle” process in combination with high-pressure injectors centrally located in the combustion chambers.

With its artificially shortened compression phase, the B cycle enables an engine process with a significantly higher base compression ratio. Combined with a power stroke that, while normal, is longer relative to the compression stroke, this allows for more efficient combustion and increased engine efficiency.

Under part load, the Audi valvelift system enables a very short intake aperture duration of 130 degrees of camshaft angle coupled with the early closure of the intake valve. This shortens the intake phase. At higher loads, the system switches to a camshaft contour with a longer opening time and a larger valve stroke. The engine then operates with a normal compression ratio and maximum throughput. 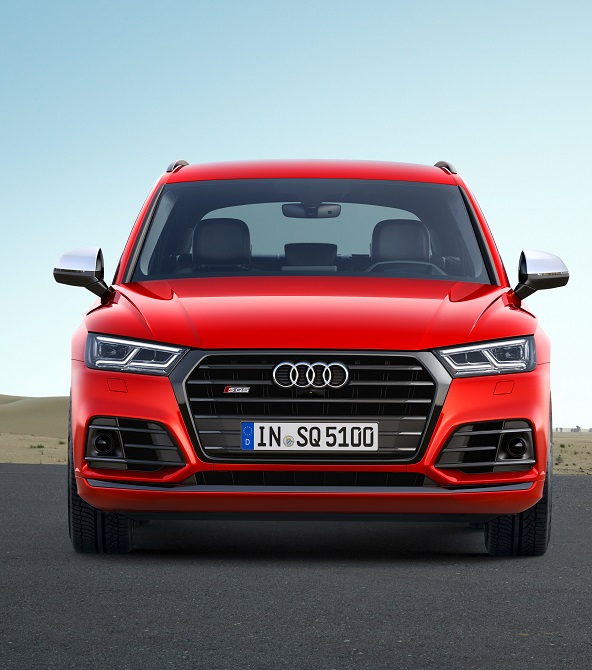 The turbocharger, which replaces the mechanical compressor of the previous engine, operates according to the twin-scroll principle. The exhaust branches of the two cylinder banks run separately in the exhaust manifold and in the turbocharger housing, and only merge before the turbine wheel. This technology improves the flow characteristics for more spontaneous turbine response, and is key factor behind the early and powerful development of torque.

The turbocharger is located within the 90-degree V of the cylinder banks. Accordingly, the exhaust side is on the inner side of the cylinder heads and the air intake on the outer side. This arrangement enables compact construction and short gas flow paths with minimal flow losses, thus the 3.0 TFSI responds extremely spontaneously and directly.

The crankcase and the cylinder head have separate coolant circuits. After a cold start, the switchable water pump controls the flow of coolant through the engine so that the oil comes up to its operating temperature as quickly as possible. The exhaust manifold is integrated into the cylinder head and bathed in coolant. This helps the engine to heat up quickly. When the engine is warm, the system reduces the exhaust temperature. The result is lower fuel consumption, particularly during sporty driving.

A fast and smooth-shifting, eight-speed Tiptronic transmits the power in the new Audi SQ5.  The lower gears feature short, sporty ratios, while the upper gears are long to reduce revs and fuel consumption. Provided that the function is activated in Audi drive select, the transmission automatically switches to freewheeling mode as soon as the driver lifts his foot off the accelerator at speeds between 55 and 160 km/h (34.2 and 99.4 mph) for even greater fuel efficiency.

The quattro permanent all-wheel drive contributes to the sporty handling. During normal driving, it distributes the engine power with a slight rear-axle bias. When necessary, the lion’s share of the power is sent to the axle with the better traction. Wheel-selective torque control is active on all types of surfaces. During dynamic cornering, the software function slightly brakes the inside wheels. The car turns itself into the curve ever so slightly. Turn-in behavior remains neutral longer, and handling is stable, precise and agile.

The optional sport differential further optimizes handling by actively distributing torque between the rear wheels via two superposition stages. It sends more torque to the outside rear wheel when accelerating out of particularly tight radii, making the Audi SQ5 even more agile. The sport differential literally pushes the car into the curve, nipping understeer in the bud. Its management is integrated into the Audi drive select control system, and it runs over a central control unit, the electronic chassis platform.

A five-link suspension front and rear lays the foundation for the sporty driving characteristics of the new Audi SQ5. The complex design provides for greater stability at the limit and combines increased agility with significantly improved comfort. The standard damper control features a particularly wide spread between comfort and dynamic. The adaptive CDC dampers (continuous damping control) are integrated into the Audi drive select system along with the engine, steering, tiptronic and optional sport differential. The driver can control the characteristics of the engine and suspension over several modes.

The new electromechanical power steering with S-specific tuning is an important contributor to the driving dynamics of the SQ5. Optionally available is the dynamic steering, which varies its gear ratio depending on the speed and steering angle.

A host of driver assistance systems…

Of course, this Q5 will assist you with a wide array of systems. But it is good to note that Audi pre sense city is standard. The system warns the driver about pedestrians and vehicles, and initiates automatic emergency breaking within system limits.

In Germany, the SQ5 comes with a comprehensive list of standard equipment, including 20-inch, cast aluminum wheels in a 5-twin-spoke star design, LED headlights and S-specific damper control. Also included are quattro permanent all-wheel drive, eight-speed tiptronic, sport seats in Alcantara/leather and a three-spoke, leather-covered multifunction steering wheel. The new Audi SQ5 3.0 TFSI will be available for sale in Germany from mid-2017. It is produced in the new factory in Mexico.

We look forward to sit behind the wheel of one in autumn this year!