Three years ago, Lexus caused a stir with the debut of the LC coupe at the North American International Auto Show (NAIAS) in Detroit. Since then, its design team has been exploring how the brand can evolve, leading to the creation of the new Lexus LC Convertible Concept, an appealing open-top roadster that makes its first European appearance at the 2019 Geneva Motor Show on 5 March.

The designers had one major goal for the concept, and that was ‘ultimate beauty’. From the rake of the windscreen to the smooth contours of the rear deck lid that houses the retractable top, every line was drawn to evoke an emotional response. The result is, as Lexus calls it,  a halo vehicle for the entire Lexus brand.

Retaining the styling language of the LC Coupe

“This concept takes the unmistakeable design of the LC coupe and interprets it as a future convertible,” said Tadao Mori, Chief Designer of the LC Convertible Concept. “It blends all the best aspects of the original coupe with the dynamic design of an open-air convertible.”

Long, low and lean, the LC Convertible Concept retains the LC coupe’s athletic proportions. The shape evolved naturally from the original LC design, yet it has its own, distinct identity. 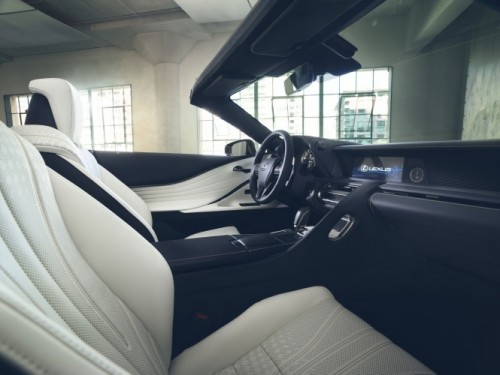 More than just a grand tourer, the concept has a performance pedigree, its potential expressed in its short overhangs, 22-inch wheels and wide stance.

Beyond the visual appeal of the sheet metal, the cabin is an attractive space for driver and passengers alike. The tailored seats are upholstered in crisp white leather with yellow accents providing a splash of colour without disrupting the subtle elegance of the overall design.

Just wait until March 5 to see it in the flesh!