The smallest Mercedes is more than ever a true Mercedes. It breaks not only new ground in body styling, also its new cabin layout is a big step forward, and then we said nothing about its formidable touchscreen and enhanced connectivity and infotainment, which was hitherto unseen in its class. An important Mercedes, and therefore we tell you here more about it…

The new A Class stands out with a new front design with a low bonnet, flat optional LED headlamps.  The radiator grille with Mercedes star has now a silhouette which opens out towards the base as a reinterpretation of its predecessor. The car has a wider look at the rear end thanks to a more heavily whaisted greenhouse which also accentuates the shoulders, and to the wider-spaced rear reflectors in the modular, two-section rear bumper. The slim tail lamps are in two sections. The A Class has now also bigger wheel arches – from 16 to 19 inch – and a longer wheelbase.

In the interior, the most striking is the avant-garde design of the dashboard: for the first time a cowl above the cockpit has been completely dispensed with. The Widescreen display (optional) is completely free-standing. The air vents in a sporty turbine-look , are another highlight.

The dashboard is divided into two three-dimensional, horizontal sections: the lower section is visually separated from the main body of the dashboard by a “trench”, and it appears to float in front of the dashboard. The ambient lighting enhances this effect, accentuating the free-floating impression of the substructure. The 64 colours of the optional ambient lighting make five times as many colours available than before.

The new A-Class is the first Mercedes-Benz model to feature the completely new multimedia system dubbed by the manufacturer as “MBUX” – Mercedes-Benz User Experience, which also ushers in a new era in Mercedes me connectivity. A unique feature of this system is its ability to learn thanks to artificial intelligence. MBUX can be suited to your individual taste and preferences, creating, as the manufacturer puts it, an emotional connection between the vehicle, driver and passengers.

Its further strengths include the high-resolution Widescreen cockpit with touchscreen operation of the media display, the navigation display with augmented reality technology plus intelligent voice control with natural speech recognition, which is activated with the code word “Hey Mercedes”. A head-up display is also available. The touchscreen is part of the comprehensive MBUX touch-control concept – a triad consisting of the touchscreen, touchpad on the centre console (optional) and touch control buttons in the steering wheel.

The new A-Class is already set up for private car sharing: Mercedes me allows the new compact car to be shared with friends and family members (in all likelihood available from August 2018). Operation is simple and secure using the Mercedes me Car Sharing app from Mercedes-Benz.

More shoulder, elbow and headroom plus easier access to the rear are clear benefits, as is the larger and more family- and recreation-friendly luggage compartment. All-round visibility has also been considerably improved. The capacity of the luggage compartment behind the rear seats is 370 litres – 29 litres more than in the preceding model. Thanks to two-section rear lights, the loading aperture is 20 cm wider than before, and the luggage compartment floor is 11.5 cm longer. In conjunction with the Load Compartment package, the rear seat backrest can be positioned more upright, e.g. to accommodate bulky boxes.

Comfort features from the higher Mercedes classes make their entry: on request, and for the first time in this model series, not only seat heating but also seat climate control and a Multicontour Seat Package with a massage effect are available for the front seats. With the Multicontour Seat package, the side bolsters and lumbar support can be individually adjusted by an electrically driven pneumatic pump.

With all this luxury, much attention is also given to make the ride more subtle and refined. Alongside effective Insulation of the suspension from the vehicle body and aeroacoustic measures, the bodyshell itself plays a decisive role. During the development of the A Class, particular attention was given to high overall structural rigidity and the connecting points between the body, suspension and powertrain. Significant increases in introduction rigidities were especially achieved at the suspension connecting points that are so important to road roar, and the interior noise level was considerably reduced.

The split rear lamps are clearly visible, and hallmark of the new generation A Class…

The optional MULTIBEAM LED headlamps are another example of the technology transfer from the luxury to the compact class. These allow extremely quick and precise, electronically controlled adjustment of the headlamps to suit the current traffic situation. 18 individually actuated LEDs are housed in each headlamp. The daylight-like light colour of the LEDs is easy on the eyes and has a positive effect on concentration. New, efficient petrol and diesel engines.

The following three engine variants will be available on the launch of the A Class, or shortly afterwards:

All the new A-Class models are powered by new, efficient engines: Two new four-cylinder petrol engines are available at market launch. Innovations in the M 282 with a displacement of 1.33 litres and up to 120 kW include cylinder shutoff (initially in conjunction with the 7G-DCT transmission) and the delta shape of the cylinder head. The second new petrol engine is the M 260 with a displacement of 2.0 litres, 165 kW and 350 Nm. New features include CAMTRONIC for the intake camshaft. Both petrol engine series have a particulate filter as standard. 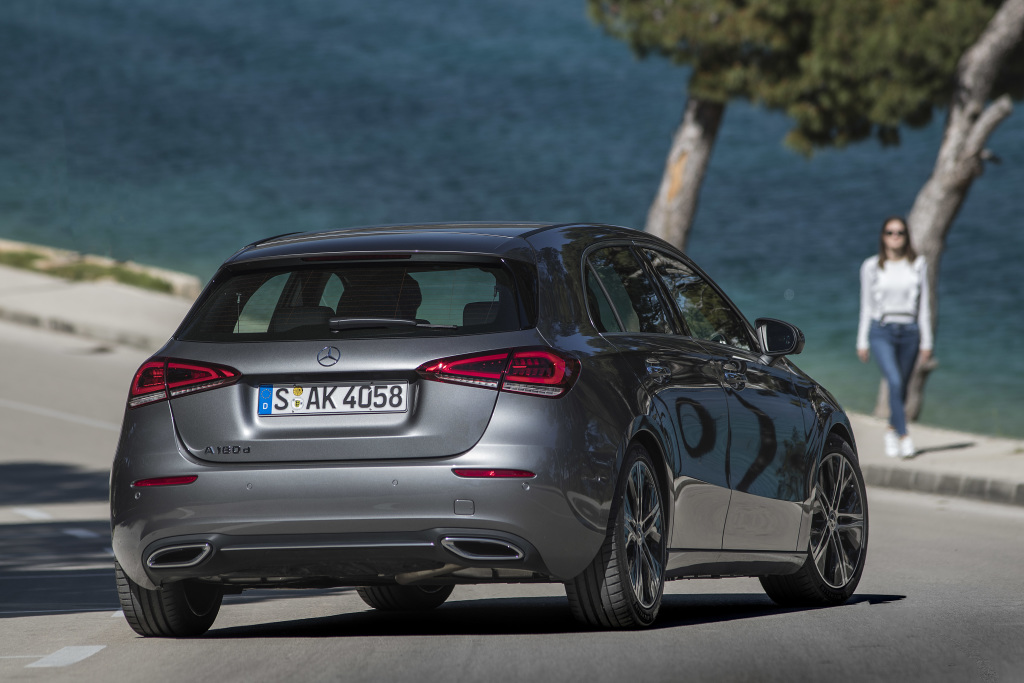 Also new is the four-cylinder diesel (OM 608) with a displacement of 1.5 litres, up to 85 kW and up to 260 Nm. Its highlights are a near-engine mounted emission control system with AdBlue® technology, a turbocharger with optimised responsiveness and water intercooling. A new 7G-DCT dual clutch transmission is also being introduced. Further new engines will follow. The fuel tank has a capacity of 43 litres as standard, with a 51-litre tank optionally available for the top models.

On request the new A-Class is available with the permanent all-wheel system 4MATIC with fully variable torque distribution. This sporty all-wheel drive system has been developed further, and now offers even more driving pleasure and efficiency. Using the DYNAMIC SELECT switch, the driver is able to influence the 4MATIC characteristics even more than before. 4MATIC components include the power take-off to the rear axle, which is integrated into the automated dual clutch transmission, and the rear axle differential with an integrated multiplate clutch. This is no longer electro-hydraulically powered, but instead electro-mechanically.

We are very keen to get our hands on a new A Class soon, and report you about the way it drives and handles. Stay tuned!