Barely visible from a distance, but in need for repair, and therefore we drove our fiathful 850 to the professional repair booths at Wondercar Zaventem…

It all happens in an automotive life. The little pole on the kerb one doesn’t see. The front door on the right side of our faithful 1995 Volvo 850 took the little blow. A dent on the lower end of the door was the result.

So we needed a bodywork shop which specializes in small repairs, and soon we found the right address: Wondercar in Zaventem…

Our first contact proved swift and professional. No need to present the car, if the damage is slight and provided detailed photos are made of the bodywork spot where the mishap was done.

You can have a coffee and work a bit while you wait, (WiFi is provided) or grab a bike and come back a few hours later…

We sent them an e-mail with some pictures, and an estimate was sent to us the same day, with subsequently an appointment taken. The repair would set us back 300 Euros (including VAT) for the door.

First the spot was sanded down to reveal the bare metal, then with an electromagnetically heated pointed object  several attachment points were pierced in the bodywork to pull the dent out as much as possible, a job which takes much experience and practice. 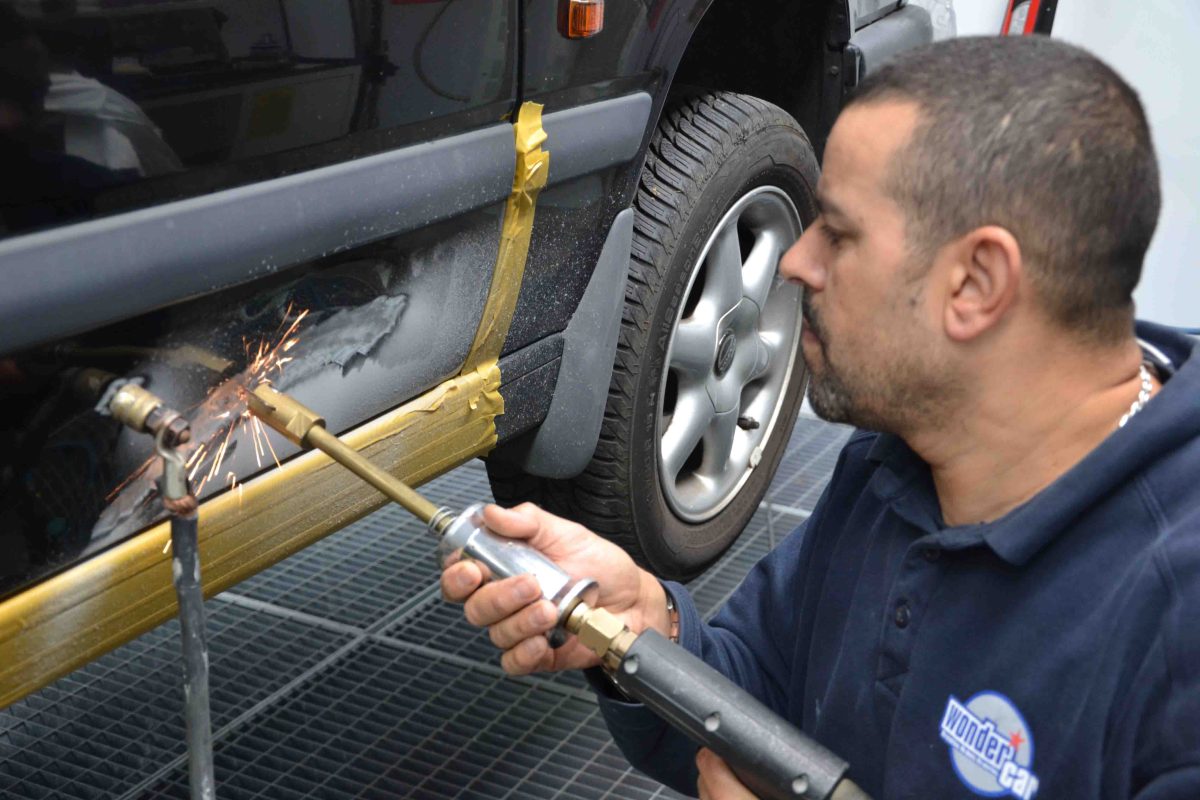 Then the whole area beneath the rubber touch strip was sanded down with very fine sanding paper to get an even and very smooth finish, at the same time creating the ideal roughness to let the filler bond with the surface. 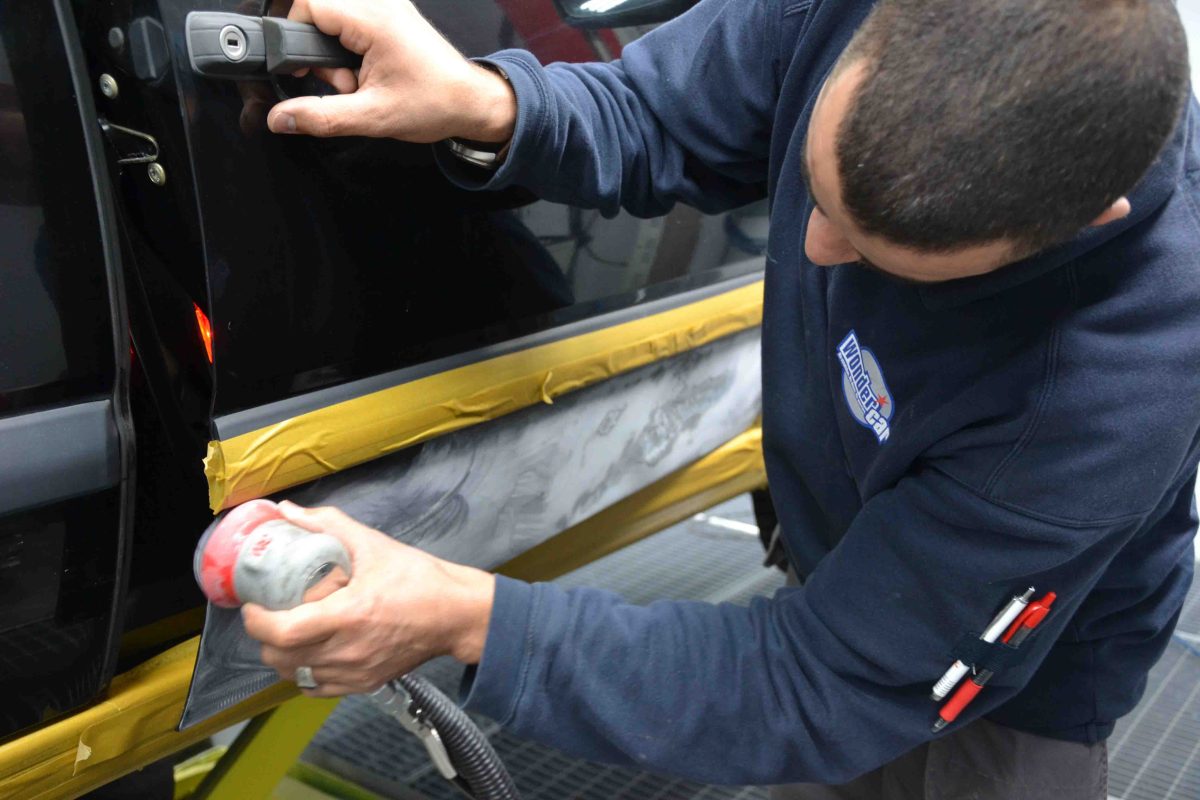 Subsequently, filler was carefully applied to the spot and this made the dent disappear to the naked eye. 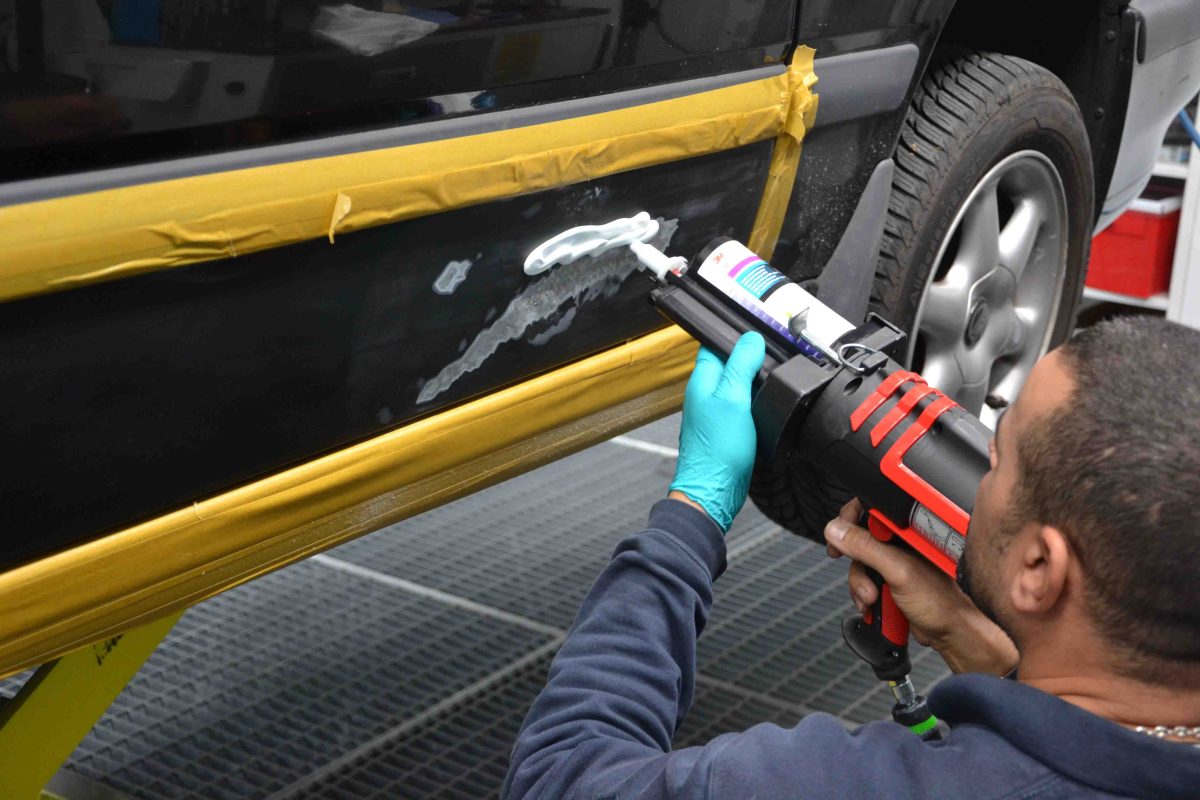 Then the filler is carefully sanded down and a primer is applied, to seal the spot for rust.

To achieve rapid drying of the primer, a special UV lamp is used, as primer dries under the influence of daylight.

In a matter of minutes, the primer was fully dry. In the meantime, a scanner had been used on the paint of the Volvo, to match the color of the repair spot with the rest of the bodywork. It appeared that 97 % of black had to be used.

Before painting, some very careful sanding down of the primer was necessary. For this, first of all an indicator or “guide” black powder is applied, to guide the sanding process, indicating which areas (still) need to be sanded. See the photo below. 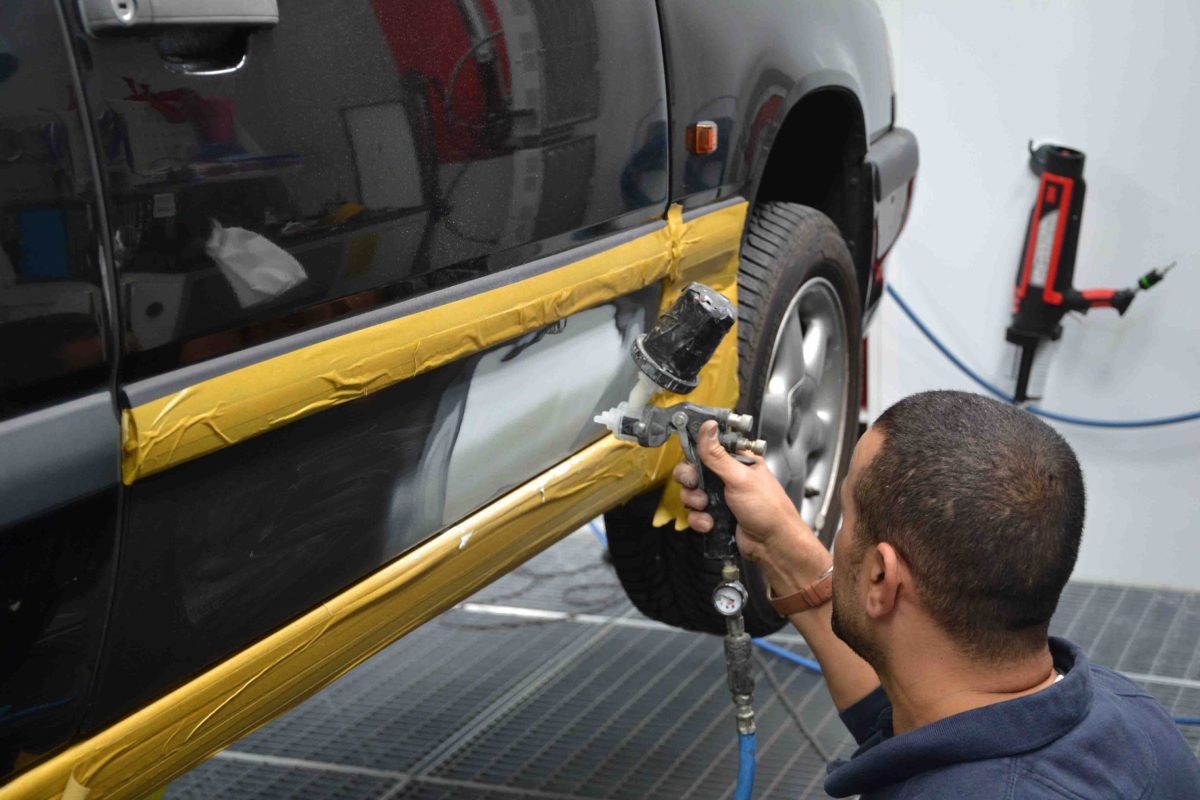 This grey layer is then sanded down…

This process is repeated several times until a perfectly smooth surface is achieved.

After this, the area surrounding the repair spot is carefully and hermetically sealed off to avoid any overspray. With gentle, even strokes, the paint is applied, and subsequently the gloss varnish.

Then a special infra red drying installation is used, first 2 minutes at 80 degrees, then at 120 degrees Celsius…This fully dries the repair spot and the repair is finished!

We are proudly driving a pristine 850 Volvo again, save for the roof strips, which are beyond repair. We will contact soon Volvo Vermant to see if he has any (used) spares, or even a roof rack…

Wondercar, a bodywork repair branch which is part of the D’Ieteren group, has impressed us with their professional service. Soon we will interview the people at the helm of Wondercar on their business… stay tuned!