The communication manager of the factory, Anneli Ericsson, introduced us to the man and women we interviewed, and we admired her for her kind, meticulous professionalism, as much as we are also grateful to Annika Bjerstaf, Editor and Press manager of Volvo Car Corporation, who accompanied us also during the visit and offered us together with her colleague the “surprise” to take our 850 on the assembly line.

We start off here with a new series on our site, focusing on the human element. For cars are first and foremost a creation of man. A result of human ingenuity, creativity, talent and last but not least  craftsmanship. So we decided to put this all forward. We start here with a portrait of the people we met at Sweden’s largest factory, Volvo Torslanda, close to the beautiful city of Gothenburg, brimming with industry and quality of life.

“My name is Lena Nihlmar”, she said. Before us stood a svelte woman in her mid forties, her face evoking this uniquely pure Scandinavian character and freshness, further enhanced by her light blue eyes. The very light blonde color of her curly hair literally completed the picture. She spoke calmly, with a hint of shyness, yet she was very spontaneous, weaving in her English that melodious intonation of Swedish.

We asked her about her working experience at the Ghent factory, where she went as a girl of 18, as one of the female Volvo workers to learn the craft of finishing the four doors of the new Volvo 850 saloon, which was to be built at the Torslanda factory. In Ghent, the 850 station wagon version was already being manufactured. “In Ghent, there was a door workshop, actually, one team built the left doors and one team built the right doors. The workshop took two weeks, and at that time, I was one of the few girls.” Her eyes lighted up under a broad smile. Of course she liked Ghent!

When she returned, she then started to learn her colleagues in Torslanda how to make the doors. We wanted to know whether the work is now very different from then. “Well, now we have a door line instead of a stationary workshop”.  She now leads the team who fits the doors on the new Volvo’s, at a pace set at three minutes, she explained us with a hint of pride on her face. Her day starts at 6.30 am, and with a break at breakfast time, it lasts until 14.36.

Of course, she drives a Volvo, we asked. “Well, no, I don’t have a drivers’ license!” she answered again under a smile, but she reassured us, her son and husband drive Volvo’s… “My husband also works in the factory”, she concluded, “at the car bodyshop.”

We then went to speak with Peter Nilsson, a quiet spoken man in his early fifties. He started working at Torslanda in 1985, and told the story of his working career with much humor. “I worked on the 240’s and then on the 940’s”, here too we heard this pleasant Swedish tone in his English, which really rings through when speaking numbers.

“When we made the 240’s, we had the doors on the car all the time. But you did not have to connect much on the doors, just the speakers, and a bit later the electric mirrors” he said under a broad smile.

Then came the time of the 850; “I was not so lucky to go to Ghent, I learned the craft from my colleagues who went there”.

But Peter was so lucky to have many a drive in the 850 prototype cars. “I had a colleague who was in the development department and he had the chance to drive prototypes over the weekend. These were actually 940’s with the chassis and mechanical elements of the 850” he continued. “So we drove them. But he was expressly asked not to perform burnouts or rather accelerate briskly, so the front tires would screech, as it then would clearly show they were front wheel drive cars”.

He remembers the time he worked on the 850. “I did quite a few things, like the wheelhouse lining, the pedals, the steering wheel. I also installed the electrical wiring harnesses.”

We asked whether life has changed for him, production wise. “Well, now it is lean production”, he continued, “but you can’t change that much. We work with robots now. In former days, we put the windshield on by hand, now this is done by robots.”

Peter is now involved in training and teaching colleagues the production techniques, which he gets taught in his turn by people working out the assembly of new models. “Soon they will again teach me the techniques for a new model. There will always be new models in Torslanda” he smiled, as indeed the pace of introduction of new models is ever increasing.

“We were amazed and proud of the quality of the 850”, he said with pride in his eyes, to conclude our conversation. “They were good cars. In those days, the exhaust system was a thing which had to be replaced more often than not. But not on the Volvo 850. It did’t need that!” I couldn’t agree with him more: the exhaust system on my 22 year old 850 is still the original one… 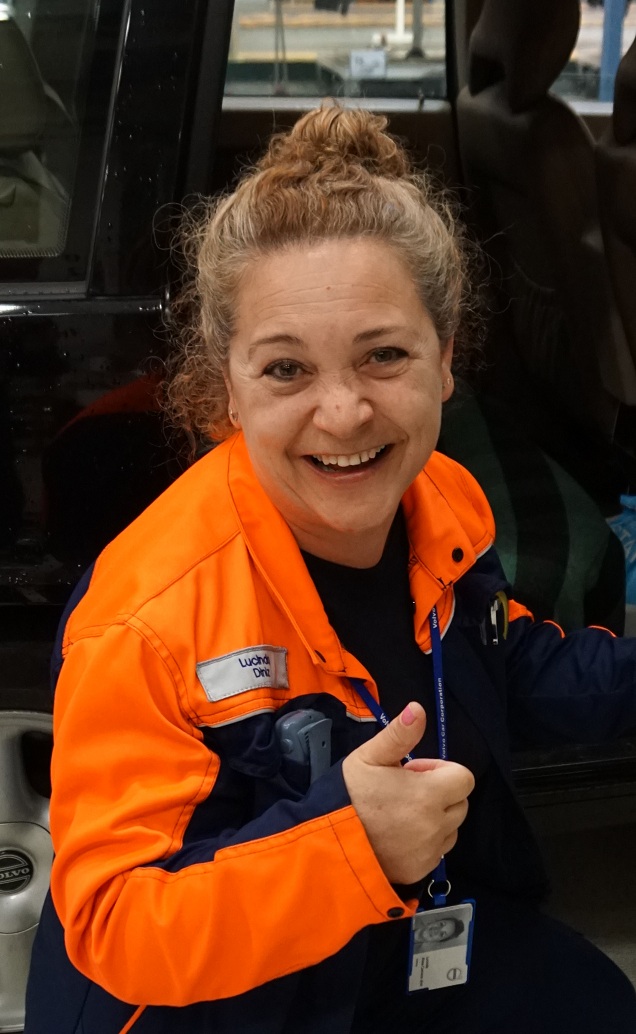 Finally, we met up with Luchinda Dimiz. Her kind brown eyes and less angular face betrayed here more Latin origins: “I am from Portugese ancestry” she started off the conversation. Yet also her English had the melodious Swedish accent, and more often than not she addressed our kind host Anneli Ericsson, in fluent Swedish when she could not find the correct English terminology.

“We did not have a door line as now, we had more a fixed station, and we worked on the four doors. We made 18 doors per shift. Oh, we had a fine team then. We checked also ourselves the quality of the work we did. Our responsibility was then to deliver a perfectly finished and working product.”

Being conscious and quality oriented, she then went on to the SIP (Side impact Protection) quality inspection, and spent then four years on the quality team which was involved in the production launch of new models. Presently, she works at the administration of the assembly plant.

But of course, she vividly remembers her days working at the doors of the 850 sedan. “This was since 2005, my sticker on the door was 24”, she smiled with gleaming eyes. As we said in our earlier report, she had the chance to stick again the red reflector cover on the safety lamp in the right rear door, a gesture she still remembered to perform very well…