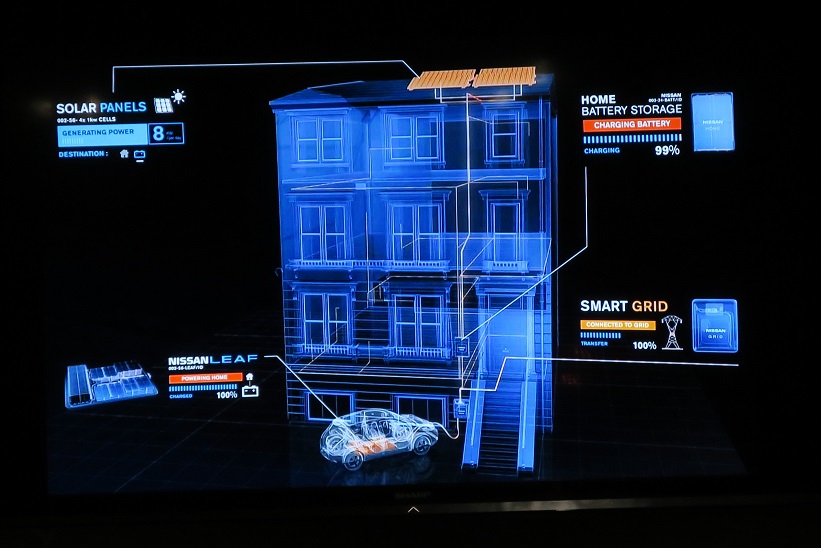 The “smart” home power station according to Nissan: the Nissan Leaf is charged through solar energy generated on the roof of your house, gives its power to the home battery storage unit, and is also smartly connected to the national power grid…

The future will be bold, according to Nissan. Cars will not only connect for safe (self)driving or to keep you socially informed and entertained, they will also connect to your home power grid, take in energy when it is cheap and you don’t need it, and give it back when you ask for it.

Connected via your home to the national and European power grids, it functions as an energy provider, ironing out the peaks of demand for these power grid systems, which is very welcome indeed to avoid power disruption(s) and shortages. In this way it also alleviates the need for (very) large investments by the energy network companies to cope with the power demand surges…

We attended a very interesting conference in London, where Nissan steps into this energy “sharing” future, together with very promising and strong partners like energy providers Enel and the UK National Grid, who see also the advantages of this concept.

Your electric car sitting idle? Not any more… 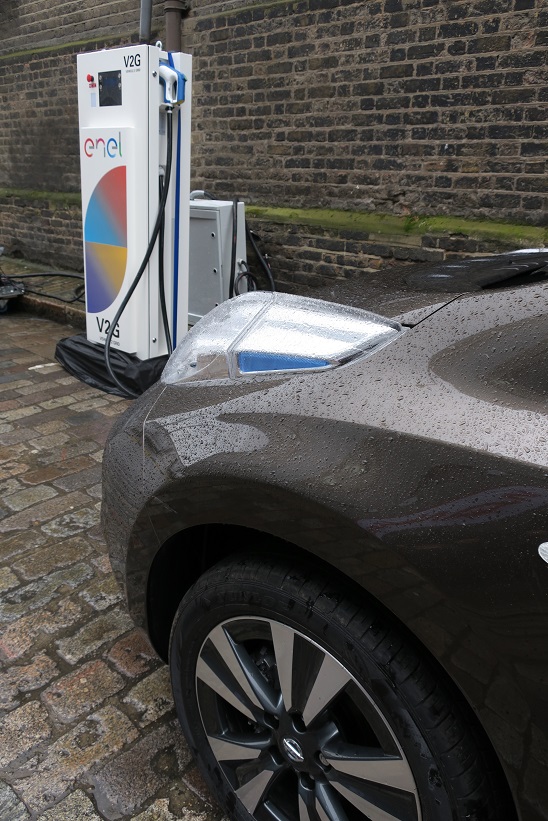 Enel will install 100 Vehicle to Grid units in the UK, a harbinger of  further initiatives in Europe.

The idea is very simple. You are going on a holiday, and your electric car sits quietly at home or in the airport car park just waiting for you to return. With batteries (partially) charged. Would not be a bad idea to keep them fully charged, which is better for the batteries. But it would then even be more ideal for the condition of the batteries if we could regularly discharge, and then again charge them. This would indeed keep the batteries even more perfectly in shape, certainly if you are a for a longer period out of the country… 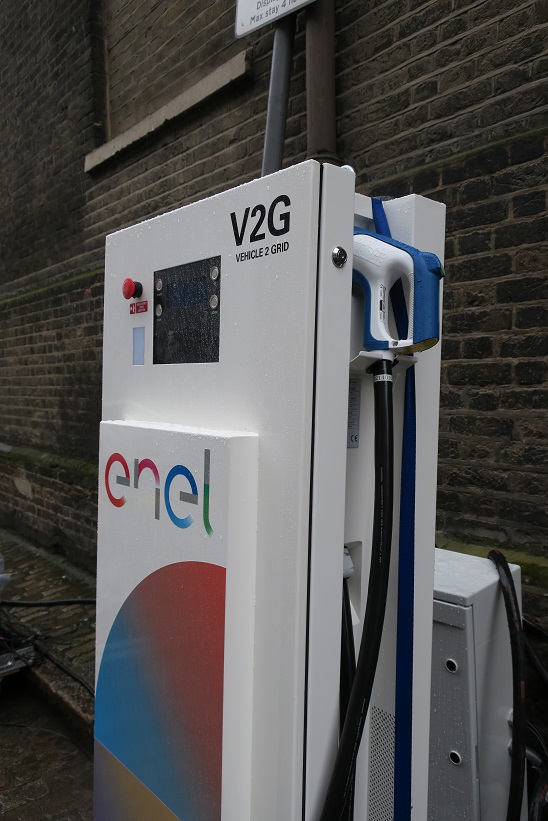 You see where we are getting to? Your electric car could play an active role in the national power grid, and act as a mini personal power station! While just sitting there, it could download and store energy when there is abundant cheap, surplus power, and give this energy back to the grid during peak consumption hours. So it could just earn you some good money, and pay (partially) for the parking…

Still not convinced? Just imagine you are going on a world (cruise) trip for a few months, or this electric car sits in your holiday home, waiting a few months before you return…

You could even arrange by remote command that it is fully charged the moment when you return, and in the meantime the batteries are in tip top shape, and it has earned you some good money! 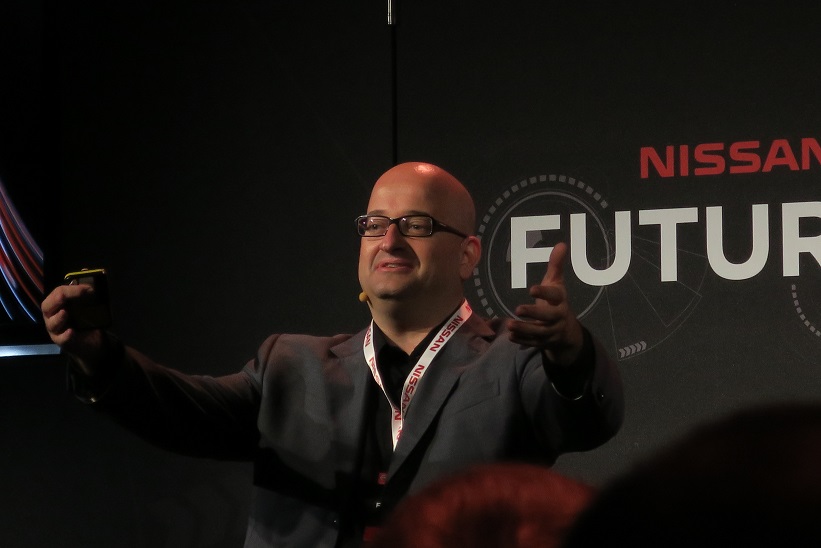 Ernesto Ciorra, head of ENEL’s Innovation and Sustainability, is thrilled about the launch of this project in the UK. It is again an excellent opportunity to show their V2G technology

The grid operators show keen interest… with ENEL embarking in the first ever Vehicle-to-Grid project in the UK.

You can imagine that this opens unseen possibilities for power grid operators. Just think about mega car parks with hundreds if not thousands electric cars just sitting there, unused for 90 pct of the day, just for the morning and evening commute, which the grid operator could use as an immense storage and supply device during the day! You see what horizons this opens in emission free zoned inner megacities… For both operators and electric car users! 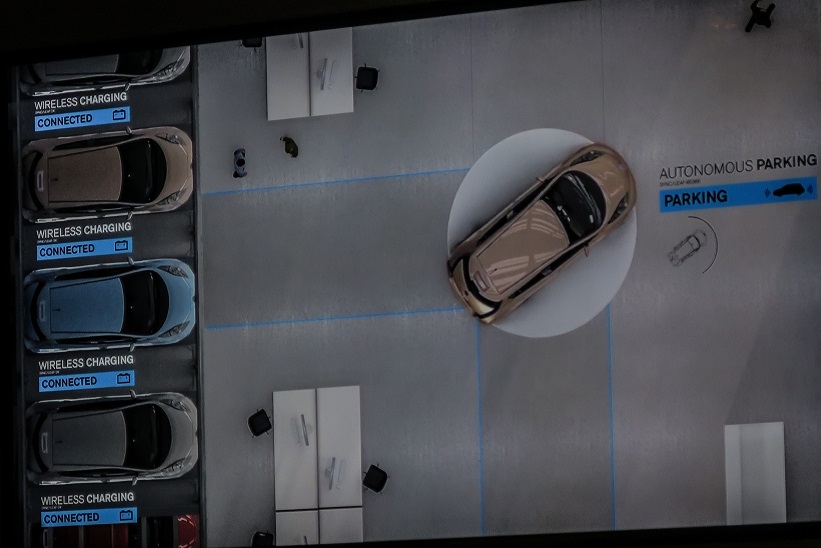 Brave future: electric cars can take part in the national energy grids through a “smart” and connected parking house… forming themselves a substantial power unit through their combined power!

It was therefore only logical that ENEL started up a trial in the UK, by installing and connecting one hundred V2G units at locations agreed by private and fleet owners of the Nissan LEAF and e-NV200 electric van.

This follows a decision taken in December 2015 during the 21st UN Conference on Climate Change (COP21) to trial V2G technology in Europe. A trial comprising 40 V2G units began in Denmark already in January 2016.

ENEL is an important player in the European energy landscape. It has grown into a multinational power company and a leading integrated player in the world’s power and gas markets. Enel Group operates in over 30 countries across 4 continents… Needless to say that it is also crucial for them that the future of massive use of electric cars (and therefore the management of energy they need and can provide) will be via integrated connection(s) to the grid(s). 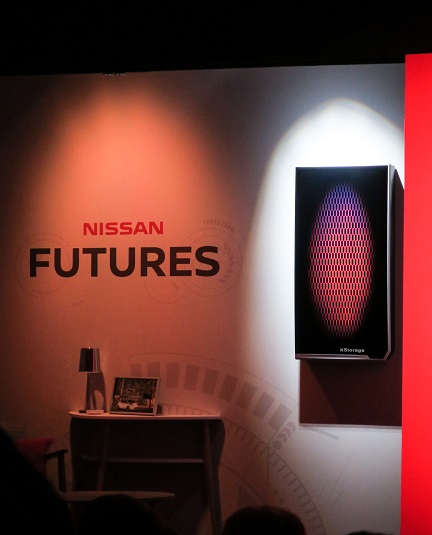 Of course, this power “to and fro” dialog with the grid operators can further be extended with additional battery capacity. Just hook up an array of batteries you have installed in your home to the grid and there you go. You don’t even have to have an electric car to play this clever energy game!

Indeed, Nissan has thought of all this and is offering now a clever and stylish battery “pack”, dubbed xStorage, for you to hang on your wall as an elegant wall decoration. It consists of recycled electric car batteries… A clever solution to the problem of what to do with the used batteries, which will be indeed rather sizeable when the electric car market gets into full swing. 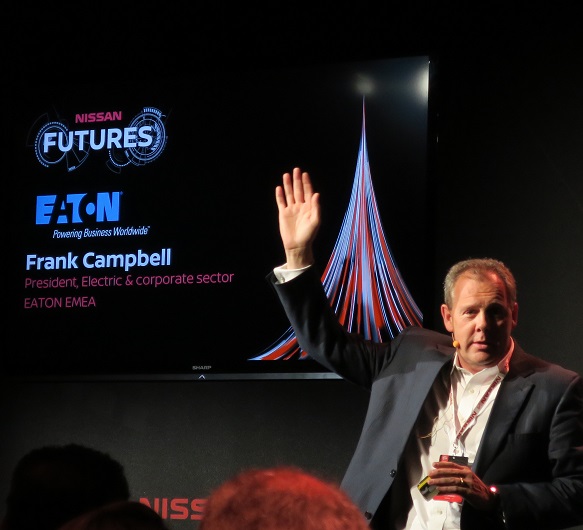 To make these elegant home storage units, Nissan went into a venture with the US firm Eaton Electric, (see photo of Eaton executive Frank Campbell above) which will sell the units and also install them in your home. The initial sale price will be around 3000 Pounds, and the firm estimates that over a period of 10 years, some 6000 pounds will be saved on your energy bill.

Such a home storage unit is of course especially interesting if you produce your own energy with solar panels. Then you can not only charge your electric car and eventually sell it later at peak hours to the grid through the car charging outlet, but you can also do this through the battery unit mounted on your wall.

Charging in urban areas through “clever” street surfaces… and buildings 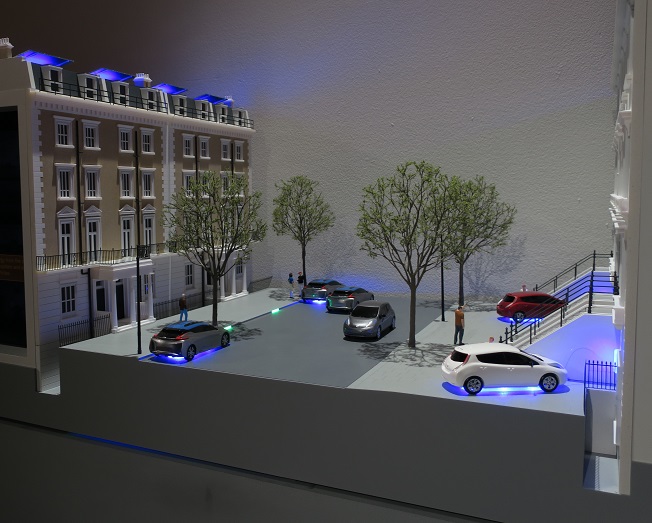 Your electric car has thus become a mobile power storage unit, and of course, every (mega)city which will get serious about creating zero emission zones in its densely built areas will have to create “smart” parking houses, and not only that. Cars will still be just parked in the streets in front of the owner’s houses, and therefore induction charging through the street pavements will be called for. 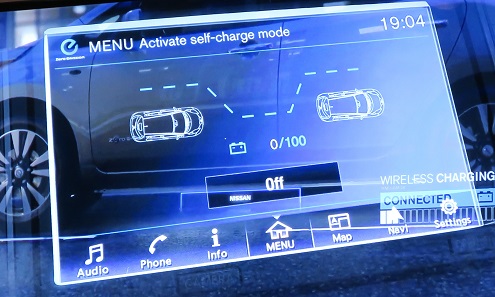 When cars will get smarter, being able to communicate with each other and drive autonomously, one can even imagine that cars will move themselves automatically in the streets to allow as many cars as possible to be efficiently charged. Brave new world!

Of course, more can be done. Not only parking houses can themselves generate energy, but also the office and apartment buildings of the future will do the same. The race in the research of energy effective and even energy generating building materials is on…

Stakeholders at the conference… 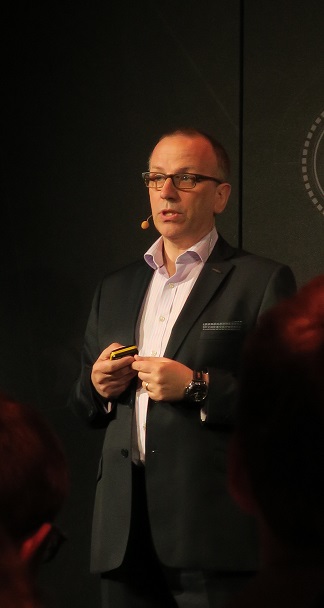 The main speaker at the conference was Paul Willcox, (see photo above) chairman of Nissan Europe. He is absolutely convinced that the electric car in our future (mega)cities – but not only there- will become a sought after mobile power unit. It is indeed an essential stepping stone in the way towards clever energy management on a bigger scale, nothing less than a much needed support for the power grid operators.

But other important speakers and venture partners also saw – literally- the light. Such as Steve Holliday, (see photo here above) the retiring chief executive of the UK National Grid. His company has signed up in the joint venture, and pointed out that customers wo shift energy demand will be paid, indeed, being rewarded for their support in ironing out big fluctuations in energy demand.

The UK is presently an important playground, as it has many electric car users already, with also the Nissan Leaf being built there, just recently achieving the 50,000 production mark. The British involvement is therefore only logical, with ENEL being the main player, as they launched here the V2G project.

We just show you here some pictures taken by your servant at the conference, with Nissan and Enel showing the manifold electric car use of the future, also as a power station!