We belong to this generation of car lovers who saw the birth of the original mini. We sat in the first year of our motoring life behind the awkwardly raked wheel of such an original Morris Mini-Minor with its unwieldy long shift stick and its willing BMC 4 cylinder 850 cc engine.

With as the only go-faster accessory a central, big bore end muffler. It gave the right sound, but did not make the car faster at all. Nevertheless, it certainly added drama and pleasure to our first Mini experience. The car belonged to a friend, was sprayed in bold dark blue and we had the steel wheels painted black. We went flat out with it almost everywhere, as the chassis was well up to its 36 horsepower or so.

Boy, did we enjoy this. Armed with these positive memories we now slid behind the wheel of this contemporary icon, an orange yellow 5 door Mini One D. What a luxury cabin! Our eyes browse with disbelief over the numerous dials and switches. They are reminiscent of the minute toggle switches in the original, but are looking rather more like the more sturdy switches which were plentiful in the BMC Mini Cooper S rally cars, scattered under and above the Halda Tripmaster.

The plentiful instrumentation in the black cabin, also evoking the BMC Rally monsters, makes us also feel like Paddy Hopkirk, and we are deeply impressed. We can only applaud the BMW styling people who succeeded in retaining the aura of the original Mini in this car. But after all, driving is believing, so read further…

Retaining the classic proportions of the original…

The genuine Mini atmosphere is not only found in the interior, also the body lines of this five door version translates very well the original shape of this iconic car. BMW keeps everything even more in tune with alloy wheels which resemble very closely the genuine thing, if we may say so. The boxy shape is masterfully retained, and if anything, the shape of the roof and windows is even more accentuated, and suggests even better than the original what Mini stood for in terms of styling…no small feat! 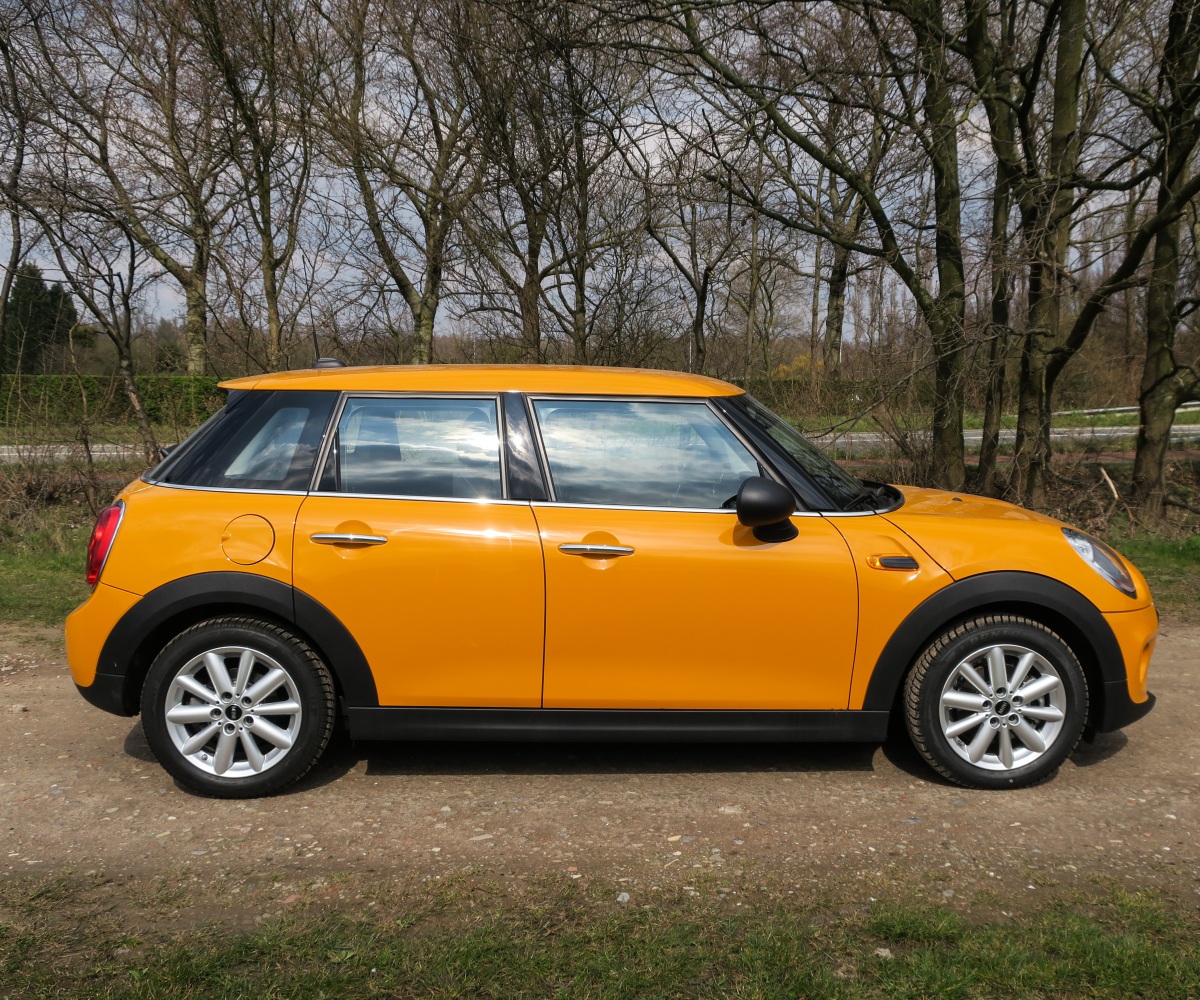 The four door version of course never existed in the original Mini, but BMW succeeded in doing this without interfering with the original balance and proportions of the car.

Of course, this Mini is a lot more spacious than its predecessor, and seats four adequately, with boot space to match.

This Mini is now a hatchback, the original just had a bottom hinged bootlid, which you just left (partially) open if the boot space proved too small… just to lug that big item home for a short distance…

Turning the key, or here rather flicking the centrally placed red chromed switch, will start up the engine. Intuitively, one expects a small breasted four cylinder to take up the job, and get some moderate pulling power through the gears. 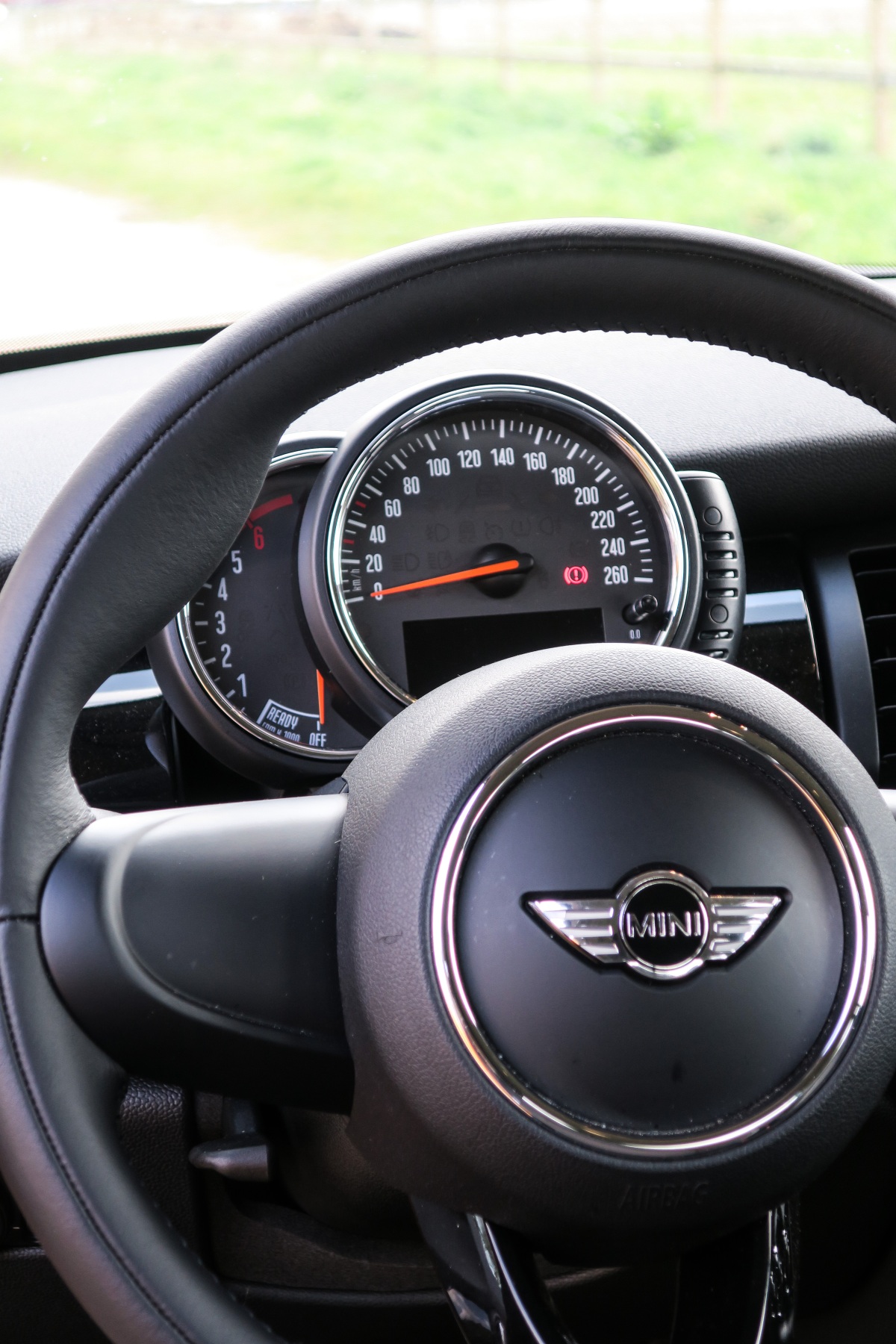 This is where one suddenly realizes that engine technology has changed dramatically over the years. The torque and massive pulling power this turbocharged modern 3 cylinder Diesel engine brings to the front wheels is of a caliber even works rally drivers could only dream of. Indeed, power is plentiful, and one could hardly wish for more in all driving circumstances. It has double overhead cam construction,  further refined injection technology, turbochargers with variable turbine geometry, on-demand operation of ancillary units, just to name a few. It is a genuine BMW engine, not stemming from Toyota or PSA, and develops 220 Nm of torque between 1500 and 2500 rpm. Max power is 70 kW (95 HP)  at 4000 rpm.

0 to 100 takes only 11,7 seconds, and the top speed is a good 187 kmh. It is even more the ever present pulling power which characterizes this Mini.

When you were not in the right gear in the original, the engine was flexible enough, but you could only exercise patience for the big speedometer needle to inch slowly higher.

But you are now living in a different world. Whatever the gear you are in, it goes like a bullet when you put your right foot down, just showing how spoilt we are nowadays.

When it comes to high speed cruising, it also shows we got light years ahead.

The original Mini was constantly treating you to a high pitch jerky ride, due to the small wheels and the short suspension travel, but this is now completely transformed, and yes, this Mini is fit for high speed cross country Autobahn cruising in the most classic GT sense. One rubs his eyes if one sees how much progress has been made, both in terms of chassis and suspension behaviour as in drivetrain technology. Cruising at some 110 km/h was close to maximum speed, with the engine running above 4000 rpm, now this speed is almost too slow for 6th gear, with the diesel unit pulling barely around 2000 rpm…with almost no engine noise.

In keeping with Mini tradition, we found the tire and wheel bearing roar rather high, making it necessary to turn up the volume of the radio to hear those silent passages in Mahlers adagietto.

In the original Mini, the engine and tire roar noise was so high that a radio was an item hardly worth having, and indeed, its designer, Alec Issigonis, said that a car was meant for driving, and one shouldn’t have a radio in a car at all… 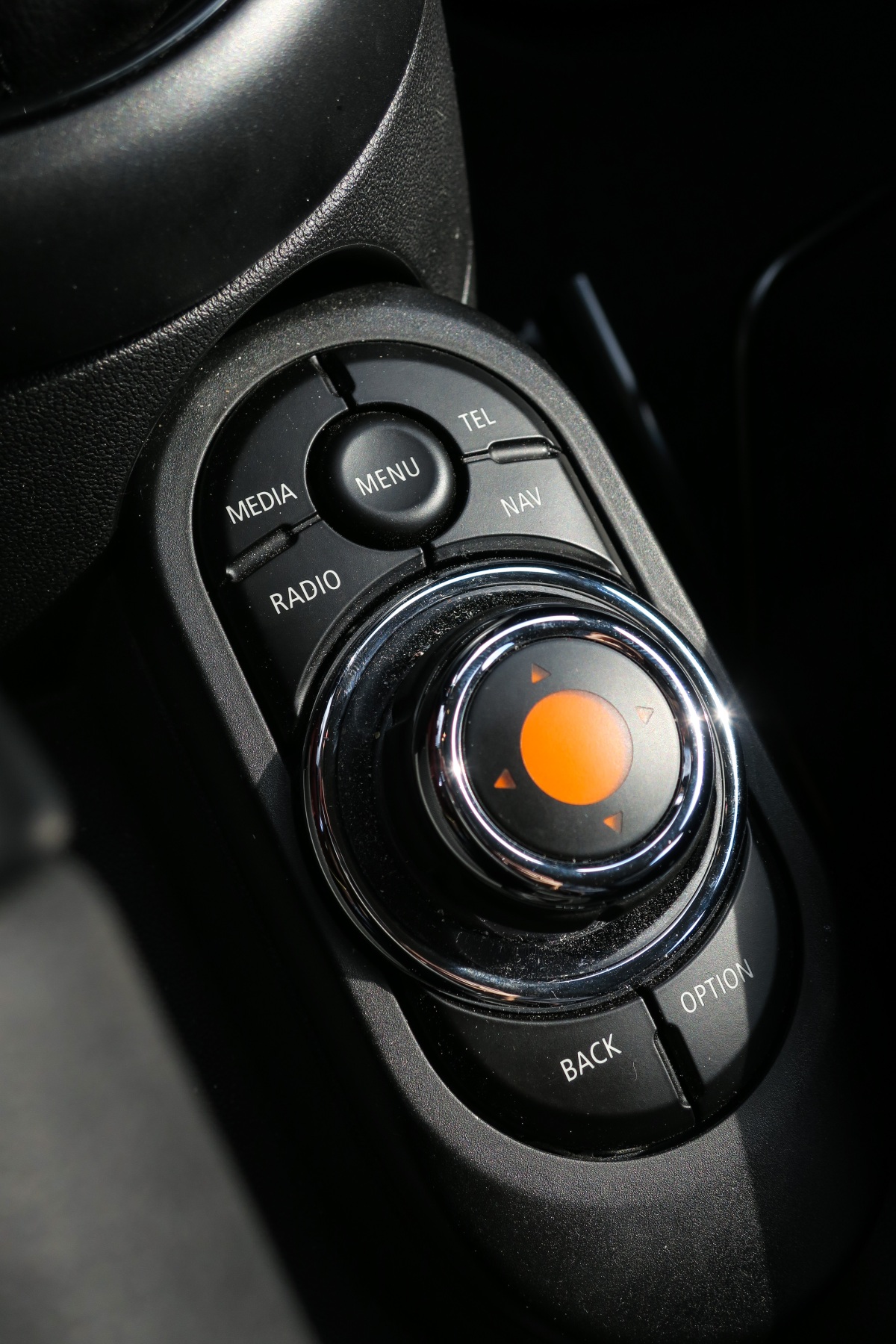 Where this present day Mini also scores very high is in economy. With the original BMC engines being rather efficient, things were not too bad, but the low gearing had a very negative effect on economy at higher cruising speeds.

This Mini belongs to an altogether different world. We averaged around 4.2 liters per 100 km during our test with the manufacturer quoting 3,6 liters as ECE average. Indeed, with a 44 liter tank, the available range is close to 1000 kilometers… 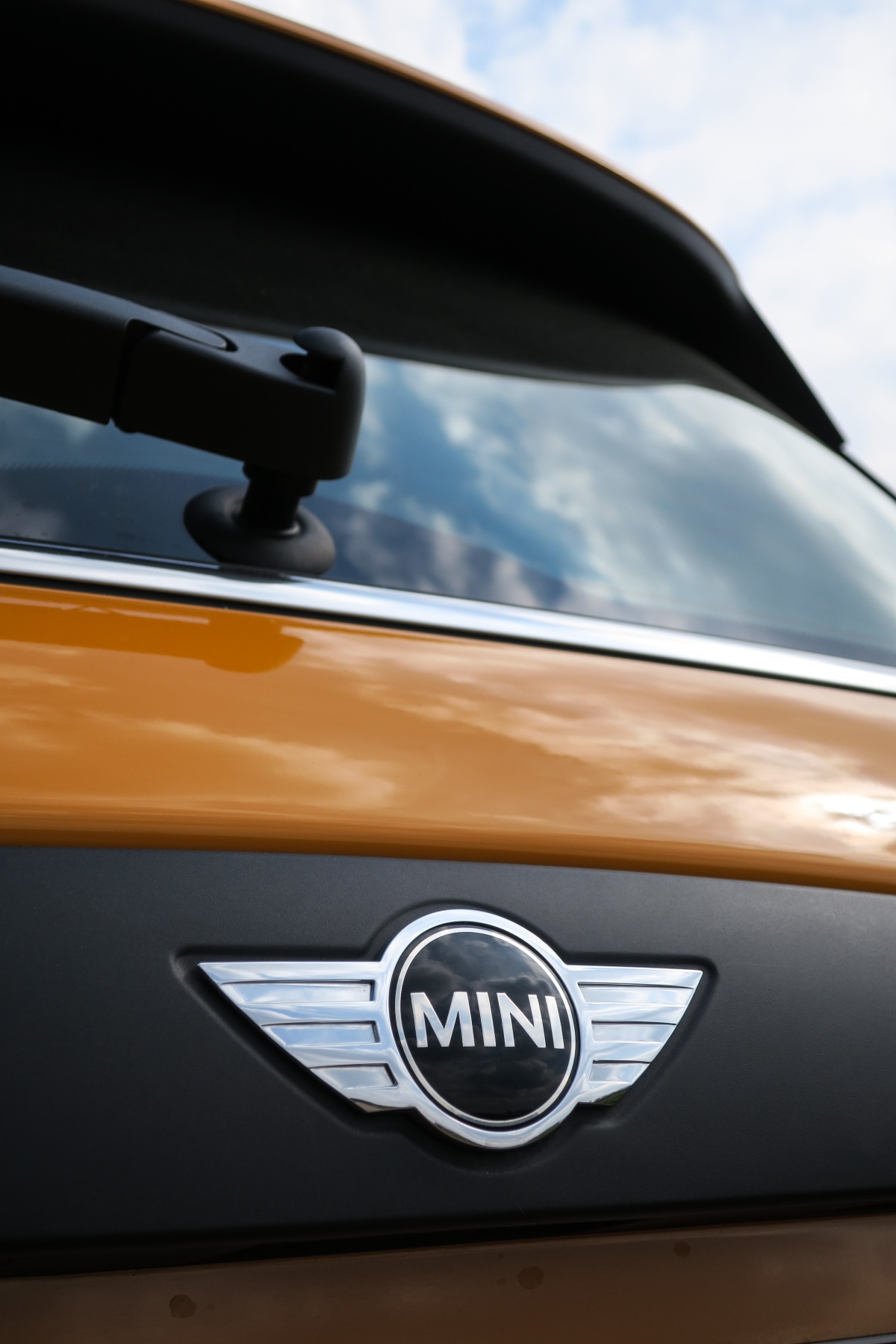 The seating position is also widely different from the “sit up and beg” position of the original. Gone is the awkwardly raked steering wheel, the delivery-van like long gearchange stick is replaced by a handy short lever which makes flicking through the gears a breeze. Admittedly, this was already present in the Cooper S Mini’s, but there you are. A proper seating position is soon found, and the adjustable steering wheel enables you to find that ideal personal setting. 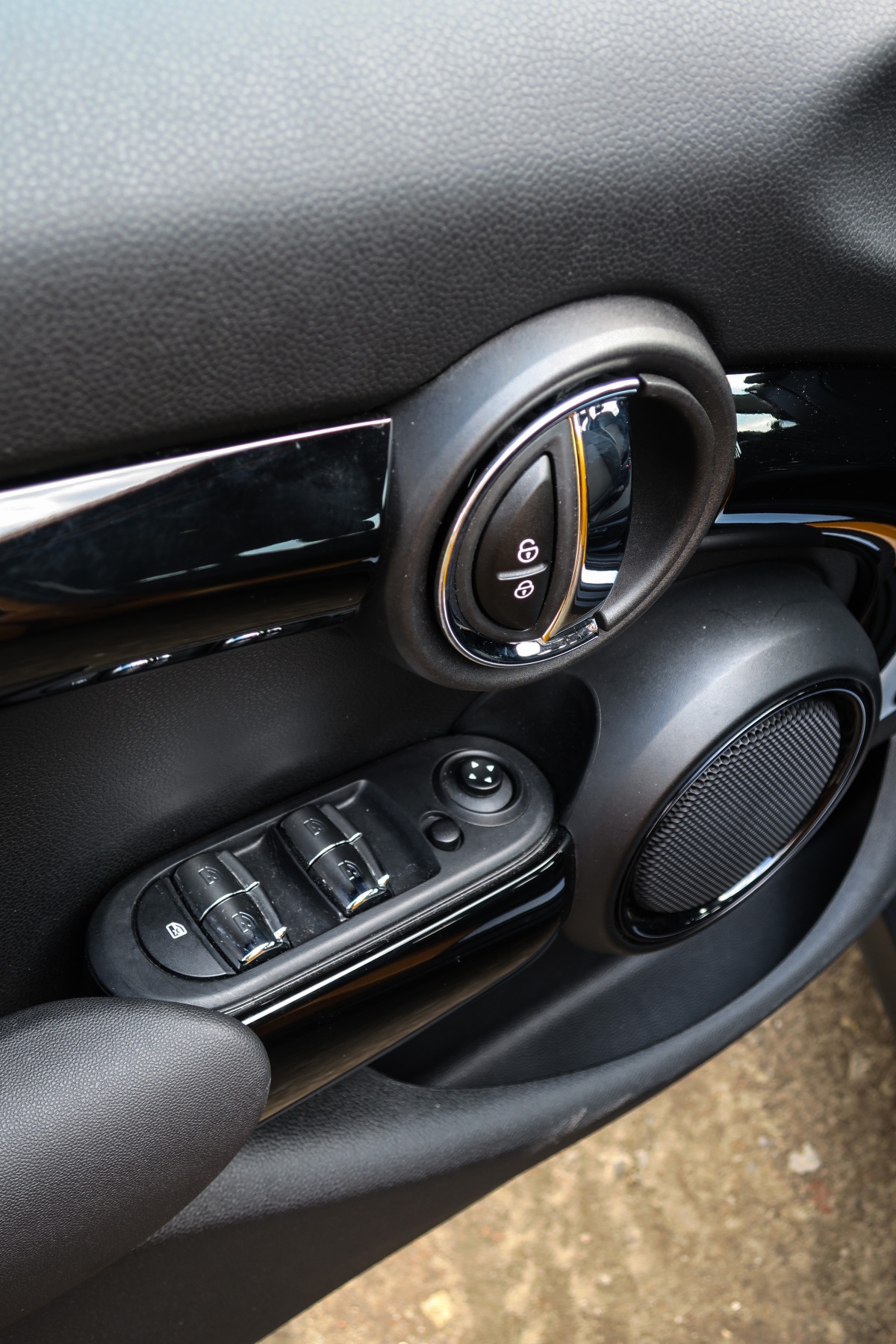 Handling is a dream, as was in the original, and the legendary agility has been totally retained. What a pleasure it is to throw the Mini through corners, with now the massive acceleration power thrown in as an extra…

BMW has driving pleasure high on its priority list, and indeed have introduced the slogan “aus Freude am Fahren” not for nothing. They have adopted this British gem, the Mini, and gave it a second, even more fantastic life. What a pleasurable car their Mini has become, practical, fast, frugal, with excellent build quality and reliability also achieved.

If you believe in cars, and are convinced that they are the most marvelous invention of our day and age, then you should have this Mini in your stable.

We can only look forward to test the Clubman version, but let it be said, this Mini One has won our hearts.